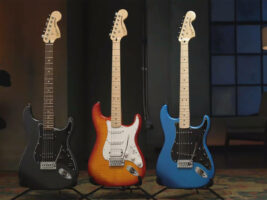 Squier’s new Affinity range landed just before Summer NAMM 2021, and thanks to a new set of demos from Fender, we can now hear all of them in action.

READ MORE: Squier officially launches refreshed Affinity range, including a Jazzmaster with a vibrato, an HH Strat and a Tele Deluxe

There are two Telecaster models in the range, the standard Telecaster and the Telecaster Deluxe. The former is based on an old-school, single-coil-loaded Tele, while the latter has a pair of Humbuckers and a Les Paul-like arrangement of Volume and Tone controls. Both feature a C-shaped neck profile and split-shaft tuner.
Squier Affinity Stratocaster Models

The new Affinity Stratocaster comes in three configurations: the standard three-single-coil model, a dual-humbucker model and a flame-maple-topped HSS model. Like the Telecasters, it sports a C-shaped neck profile and split-shaft tuners,
Squier Affinity Jazzmaster

The Squier Affinity Jazzmaster now comes with a vibrato tailpiece, as opposed to the hardtail of its predecessor. It also now sports two Jazzmaster single-coils, rather than humbuckers
Squier Affinity bass guitars

The Affinity bass offerings for 2021 include a Jaguar bass, a precision bass PJ and a four- and five-string Jazz bass. The Jaguar bass features a slightly shorter scale of 32 inches and a single humbucker for stripped-back approachability, while the Precision Bass PJ has a split single-coil P Bass middle pickup and a single-coil J Bass bridge pickup. The Jazz bass models both have a pair of single coils.
Read more on the specs of the new Affinity guitars here.
The post Hear the new Squier Affinity guitars in action appeared first on Guitar.com | All Things Guitar.