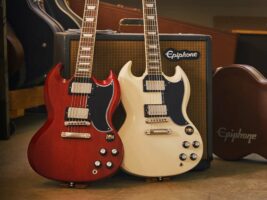 Epiphone has launched a new SG model that takes inspiration from Gibson’s first SG model from 1961 – back when it was still referred to as a Les Paul SG.

The Epiphone 1961 Les Paul SG Standard features a two-piece mahogany body with, a one-piece, SlimTaper C mahogany neck with an Indian laurel fingerboard, and 22 medium jumbo frets.
One especially notable feature is that the guitar comes loaded with a pair of Gibson humbuckers for electronics. There’s a BurstBucker 2 in the neck and a BurstBucker 3 in the bridge, which should help it to deliver authentic PAF tones.
The pickups route to your classic Gibson control setup, with volume and tone controls for either humbucker. Epiphone opted to include CTS pots and Mallory capacitors, along with a Switchcraft three-way pickup selector.
The vintage-minded SG also features some historically inspired design features, including a long pickguard and Custom Shop Historic bevels on the body.
The guitar comes in two gloss finishes, Aged Sixties Cherry and Aged Classic White, and to top it off, you get a hard case as well.