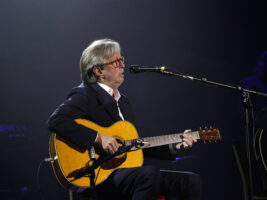 Following on from being interviewed by Robert F Kennedy and claiming the COVID-19 vaccine impacts fertility, Eric Clapton has embraced a new pseudoscientific concept, one proposed by several anti-vaccine figures. Clapton has now cited the controversial Mass Formation Psychosis/Hypnosis argument in an attempt to explain why he has faced criticism for his viewpoints, and why people believe that vaccines are effective.

READ MORE: Eric Clapton will not collect €3,400 fine from the widow who attempted to sell a €10 bootleg CD

Eric Clapton made the claim during a recent appearance on The Real Music Observer channel on YouTube, a rock music interview and gossip channel with a strong anti-lockdown and anti-vaccine perspective. The channel frequently describes anyone with pro-vaccine views as the “hivemind”, and “complete morons.” People who refuse to be vaccinated, however, according to The Real Music Observer, are not “morons” – they are simply people who refuse to “go along with the government narrative” and “love freedom.”
The channel also exclusively refers to the vaccine as “the thing,” presumably to bypass YouTube’s anti-misinformation policies, which place clarifying notes on videos discussing the vaccine. The policies also ban the outright spreading of misinformation surrounding the vaccine.
During his appearance on the channel, Clapton was asked how we got here – “here” referring to the recent widespread criticism of Clapton, particularly in the wake of him sharing his own experience with vaccine side-effects. Clapton noted that when he told friends and family about his plans to write and record anti-vaccine and anti-lockdown songs with Van Morrison, they were worried on his behalf. “So I thought, why are they? What’s going on here?”, he said.
“There seemed to be some sort of – I didn’t get the memo, whatever the memo was, it hadn’t reached me. Then I realised there really was a memo – a guy, Mattias Desmet has talked about it. It’s great, you know, the theory of mass hypnosis formation.
“And I could see it, once I kind of started to look for it. I saw it everywhere. And then I remembered seeing little things on YouTube, which were like subliminal advertising, It’s been going on for a long time – that thing of ‘you will own nothing and you will be happy.”’
The irony of his claim being made in an interview being uploaded to YouTube seemed to be lost on Clapton. However, according to him, it’s not just YouTube – he also stated that news coverage in the UK from the start of the pandemic became “one-way traffic about following orders and obedience.”
Clapton calls the theory Mass Hypnosis Formation, although it is more commonly referred to as Mass Formation Hypnosis or Mass Formation Psychosis. It essentially posits that, due to a lack of social connection and the uncertainty caused by the pandemic, the public is able to be hypnotised en-masse. In this case, a dictatorial higher power has caused them to blindly buy into a false narrative: getting vaccinated will end the pandemic. Proponents of the theory claim variety of nefarious motives, ranging from subtle erosion of freedom to outright genocide via unsafe vaccines.
If that all sounds like a paranoid conspiracy theory to you – you’re not alone. The theory made headlines recently when podcaster Joe Rogan hosted anti-vaccine virologist Dr Robert Malone on his show to talk Mass Formation Psychosis. Malone is the most prominent proponent of the theory and has argued that Mattias Desmet based it on years of published science. Experts disagree – the appearance of Malone on Rogan’s podcast prompted a group of doctors, health experts and scientists to call on Spotify, which hosts Rogan’s podcast, to create a misinformation policy.
Medpage Today summed Malone’s viewpoint up, writing: “Malone posits that promoting messages encouraging people to get vaccinated against COVID-19, among other scientifically validated pandemic communications, is an attempt to hypnotize groups of people to follow these messages against their will. Think Nazism, he has said.”
There have been zero peer-reviewed studies about Mass Formation Hypnosis or Mass Formation Psychosis published on PubMed, which collates millions of biomedical books and journals. However, the phrase is frequently used as a pejorative one in conspiratorial memes, mocking the vaccinated masses for their stupidity and stating that they are complicit in some evil scheme.
For Clapton, the theory won’t be falsified by an article like this. Guitar.com could continue to point out the rocky scientific ground upon which Mass Formation Psychosis/Hypnosis is based, and how Clapton has repeatedly shared misinformation surrounding the safety of the vaccine. However, the theory is based on the idea of manipulation and control via the media, and is frequently defended with claims of censorship. Therefore, if we do so, we are simply part of the system of control hypnotising the masses. How convenient.
The post Eric Clapton claims YouTube is using subliminal advertising to keep the masses subservient – in an interview posted to YouTube appeared first on Guitar.com | All Things Guitar.