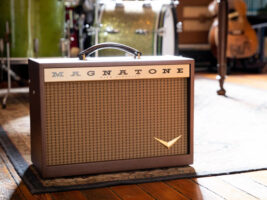 Magnatone has launched the Starlite, a small low-power combo amplifier voiced after both black-panel and tweed vintage Fender combos.

The Starlite’s circuit is based around a single 12AX7 preamp tube, and a single 6V6 power amp tube. The power amplifier is rated at five watts, and drives a custom 8-inch ceramic-magnet Magnatone speaker, made by WGS. There’s also an eight-ohm remote speaker jack for expanding your sound.
The controls are simple – there’s a volume and tone control, with a slider switch for the Negative Feedback. This allows for some extra control of the amp’s gain stage. The tone control is also subtly complex, with a specially-designed mid-cut when dialled to the left, meaning that the tonal character can cover both black-panel and tweed-era Fender amps depending on the position of this single tone knob.
The front panel also has two inputs, one higher gain and one lower, letting you choose how hard you want to hit the preamp stage, and adjust according to your pickups and pedals.
The Starlite lists for $1,299. Find out more at magnatoneusa.com.
The post Magnatone unveils the small-but-mighty Starlite combo amp appeared first on Guitar.com | All Things Guitar.