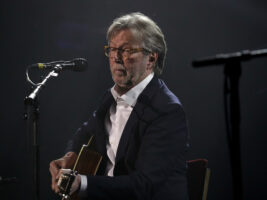 The jovial track includes Clapton’s trademark biting irony as he sings “Don’t you worry, don’t be blue / Let your woman, take care of you / Live your life, by the golden rule / Pay no mind, to the pompous fool.”
The timing of the track and Clapton’s previous criticism of Johnson has led fans to believe that Pompous Fool is a reference to the scandal-ridden premier, who resigned yesterday (7 July) after more than 50 government ministers left their posts in protest. Clapton himself has not offered any comment or insight on the track just yet, however.
Listen to Eric Clapton’s Pompous Fool below.

Clapton has previously criticised COVID-19 public health safety measures and vaccination policies implemented by Johnson’s Conservative government. Last year, he declared that he refuses to perform at venues that require audiences to show proof of COVID-19 vaccination in response to UK Prime Minister Boris Johnson’s aborted attempt at implementing COVID-19 vaccine passports that would be mandatory for entry to the country’s venues.
He wrote, “Following the PM’s announcement on Monday the 19th of July 2021 I feel honour bound to make an announcement of my own,” the statement read. “I wish to say that I will not perform on any stage where there is a discriminated audience present. Unless there is provision made for all people to attend, I reserve the right to cancel the show.”
Clapton broke his vow several months later in a performance at the Smoothie King Center in New Orleans, however.
Clapton has voiced his discontent with COVID-19 safety measures several times during the pandemic, all while being vaccinated himself. In November 2020, he teamed with Van Morrison on the anti-lockdown songs Stand And Deliver and The Rebels.
More recently, he dropped the single This Has Gotta Stop, which seemed to criticise vaccination policies, with lyrics such as “I can’t move my hands, I break out in sweat”, alluding to his own experiences from taking the AstraZeneca vaccine.
The post Eric Clapton releases surprise new single Pompous Fool as UK PM Boris Johnson retires appeared first on Guitar.com | All Things Guitar.