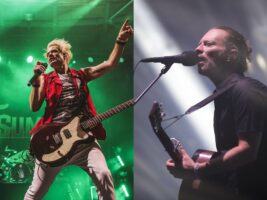 Sum 41’s Deryck Whibley has shared his thoughts on putting together set lists, explaining he doesn’t understand why Radiohead would “perform nine songs nobody cares about and then a track like Karma Police” instead of crowd-pleasing hits.

In a new interview with NME after headlining this year’s Slam Dunk festival, Whibley discussed the band’s upcoming tour celebrating their first two breakout pop-punk albums All Killer, No Filler and Does This Look Infected? and what fans can expect, explaining, “A greatest hits set with some songs from those albums that never get enough attention sprinkled in. For the longest time, I didn’t know why I toured so much but I’ve realised, I really enjoy seeing the joy on people’s faces in the audience.”
“I like seeing the excitement they have. I’ll never understand a band like Radiohead, who I love, but will perform nine songs nobody cares about and then a track like Karma Police, which makes the whole crowd lose their mind. Why wouldn’t you want to do that with every song?”
Whibley also shared that he had to learn to love the band’s earlier output, admitting he had not thought of All Killer No Filler positively before. “For the longest time, I didn’t think it was a very good album and I didn’t care for it,” he admitted, until he went back and re-listened to the LP after doing interviews for its 10th anniversary in 2021.
“I thought I was going to hate it but it was actually better than I thought!”, he mused. “There’s a lot of great energy on it and there’s a looseness to it. We’re not very good at our instruments but we somehow managed to make it work.”
The Smile, the side project of Radiohead’s Thom Yorke and Jonny Greenwood along with  Sons Of Kemet’s Tom Skinner, officially released the unreleased Radiohead song Skrting On The Surface as the third single from their upcoming debut album, A Light For Attracting Attention earlier this year in March. Skrting On The Surface was first heard during Radiohead’s In Rainbows era, having been performed live a number of times.
The post Sum 41’s Deryck Whibley says he can’t understand why Radiohead “perform nine songs nobody cares about and then a track like Karma Police” appeared first on Guitar.com | All Things Guitar.