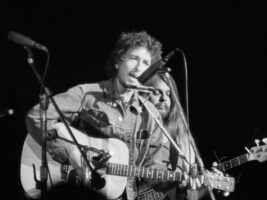 One-of-a-kind Bob Dylan recording of Blowin’ in the Wind sold for $1.7 million

A one-of-a-kind Ionic Original recording of Bob Dylan‘s Blowin’ In the Wind has sold for $1.7 million at an auction.

The auction took place at Christie’s in London and saw the recording snapped up within minutes by a yet-unnamed buyer. The recording was created using the new Ionic Original format, which uses an aluminium platter somewhat resembling a traditional vinyl record that is considered a new medium.
The recording also departs from the 1962 original recording of Blowin’ in the Wind, as it features a full band as opposed to the original’s stripped-down approach that heard Dylan using only a guitar and a harmonica to back his vocals.
Dylan announced he had been working in secret with the American producer T Bone Burnett to re-record some of his classic songs earlier this year in April, revealing that they would be recorded in a brand new analogue music format Burnett developed entitled the Ionic Originals.

The answer my friends…
Here is video of the last seconds of the Ionic Originals auction at Christie’s for Bob Dylan’s Blowin’ In The Wind (2022). Bidding started at $480k and quickly proceeded upwards, ending about 4 min later at $1.2M£ plus fees. https://t.co/wdBnz2Cz0n pic.twitter.com/Qts6JWruIN
— Dylan.FM (@fmc_dylan) July 7, 2022

“An Ionic Original is the pinnacle of recorded sound. It is archival quality. It is future-proof. It is one of one,” Burnett stated in a press release. “[These] newly developed discs [will] advance the art of recorded sound and mark the first breakthrough in analogue sound reproduction in more than 70 years.”
Dylan also has a new book coming out titled, The Philosophy Of Modern Song, which will be the folk icon’s first collection of writing since 2004’s Chronicles: Volume One. Comprising of 60 essays Dylan penned about the songs of other musicians, including the likes of Nina Simone, Hank Williams, Elvis Costello and Stephen Foster, the book is due out 8 November through Simon & Schuster.
Bob Dylan is currently on his Rough and Rowdy Ways global tour.
The post One-of-a-kind Bob Dylan recording of Blowin’ in the Wind sold for $1.7 million appeared first on Guitar.com | All Things Guitar.