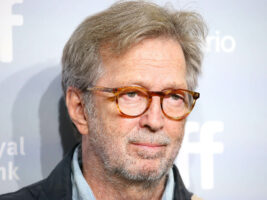 Eric Clapton has stated that he is simply pro-freedom, rather than for or against vaccination. The guitarist has attracted heavy criticism for comments made over the last year, which include spreading misinformation about the COVID-19 vaccine, speaking to anti-vaccine advocate and conspiracy theorist Robert F Kennedy Jr, and citing the controversial Mass Formation Hypnosis theory to explain why people are happy to be jabbed.

READ MORE: Eric Clapton has paid at least £1,000 to an anti-vaccine music organisation

During the first part of his interview with The Real Music Observer, Clapton stated that he had bought into Mass Formation Hypnosis, a theory that attempts to explain why people are so keen to be vaccinated – by claiming the majority of the public has lost their grip on reality, and are easily hypnotised into believing that the vaccines are safe. The theory has a tenuous relationship to actual medical science.
No peer-reviewed studies have been done on Mass Formation Hypnosis (also referred to as Mass Formation Psychosis), however it is used as a key phrase by countless anti-vaccine advocates, commonly appearing alongside dramatic eschatological imagery claiming that the vaccine is part of a “cull” or similar.
The second part of the interview has now been published, and Clapton took the opportunity to address his critics, and claim that he is neither against or for “the thing”, which is the pseudonym used by The Real Music Observer to refer to the COVID-19 vaccine. This is seemingly done to avoid YouTube’s misinformation safeguard policies.
“I’m making a rod for my own back by talking about ‘the thing’ and ‘the things’,” he stated, “but one thing about the thing I would like to make clear – because I have to keep reestablishing it – is I’m neither anti or pro. I’m freedom of choice, really, and respect for other people, and kindness, and the things that used to motivate, or were things to aspire to. Aspirations towards goodness. And… in an abstract way, religion – I believe in God and I think there’s a purpose. And this seems to be my purpose for the moment.”
Clapton also called out his critics, saying: “They know who they are and they like being monsters. They’re always going to be after people who are looking for truth or seeking something, a way forward. I’m not that concerned with being misunderstood
“You can make decisions about what you’re going to do or say without being overly concerned about the repercussions. When the repercussions happen, that’s when maybe I will learn my lesson about, well you shouldn’t have said that, or you should have said this.”
Clapton’s assertion that he is neither for or against the vaccine seems at odds with his recent interviews. While his earlier comments, taken in isolation, could have come across as simply healthy scepticism or genuine concern for the live music industry, he seems to have fallen further down a more conspiratorial rabbit hole, the most recent example of this being his touting of Mass Formation Hypnosis.
Clapton’s only recent press appearances have also been with outlets already firm in their anti-lockdown or anti-vaccine stance. His extensive video interview was conducted with Oracle Films, an anti-lockdown and anti-vaccine production company. Several months later, he took an interview with Robert F Kennedy Jr, who has since 2005 touted the idea that vaccines cause autism – a completely baseless and discredited claim. And his most recent interview is with The Real Music Observer, a gossip and interview YouTube channel with a strong anti-vaccine stance.
However, when Clapton was asked by The Washington Post to provide comment for a story, he declined. His business manager Michael Eaton cited the “depressingly bad standard of journalism reflected in certain recent articles” from the US press as the reason for his refusal.
If Clapton truly is neutral on the vaccine, it is hard to see why he views the US press as “depressingly bad”, but is happy to take an interview with a conspiracy theorist.
The post Eric Clapton says he is neither pro- or anti-vaccine, just likes freedom appeared first on Guitar.com | All Things Guitar.