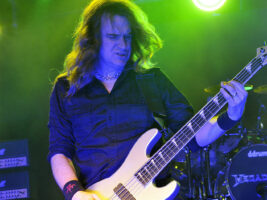 Ex-Megadeth bassist David Ellefson has begun teasing a new project from his recently-formed band The Lucid. It’s the first musical announcement from Ellefson since his firing from Megadeth earlier this year.

Updating his profile picture on his social media, Ellefson posted The Lucid’s stylised “L” logo, along with the date 8 September 2021. Presumably, the date is for the release of The Lucid’s first recorded music.
The four-piece hard rock band also features vocalist Vinnie Dombroski of Sponge, guitarist Drew Fortier and drummer Mike Heller of Raven and Fear Factory. Ellefson described the band’s sound to The Chuck Schute Podcast last year: “It’s cool stuff, and it’s very different. It’s, obviously, not thrash metal, hence the name Lucid. It kind of feels like what the music sounds like.”
The release from The Lucid will be Ellefson’s first musical output since his firing from Megadeth in May of this year. Earlier that month, footage surfaced of him masturbating on a video call with a fan. The fan’s age, later confirmed to be 19, led to accusations of grooming being levied against Ellefson. However, she clarified in a statement: “It was all consensual, I’m not a victim and I have not been groomed in the slightest as I was the one to initiate it. I was just naive enough to record him and share it with a friend without his permission.”
Ellefson himself also released a statement saying that: “As much as it’s not something I’m proud of, these were private, adult interactions that were taken out of context and manipulated to inflict maximum damage to my reputation, my career and family.”
Ellefson was dismissed from Megadeth shortly after the footage surfaced. He is now seeking revenge porn charges against the person who uploaded the explicit footage.
Despite the controversy looming large over Ellefson’s new musical output, fans were quick to express support in the comments of the tease. “Great to finally hear from you. I was hoping you would get back to your fans and start a new project. Can’t wait to hear it,” wrote one Facebook user.
The post Ex-Megadeth bassist David Ellefson teases new release from side-project The Lucid appeared first on Guitar.com | All Things Guitar.