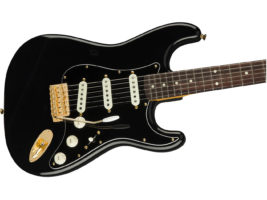 The guitars are decked out with Gloss Black finishes and gold hardware.
Following the release of its snazzy Midnight Hour Precision Bass, Fender has lined up three Made-In-Japan Midnight models – a Stratocaster, Telecaster, and Precision Bass – sporting a Traditional ’60s build.
The ‘Midnight’ guitars boast sharp Gloss Black finishes, matching black-white-black pickguards, and gold hardware.
In terms of tonewoods, the Stratocaster and P-Bass feature basswood bodies, while the Telecaster has an alder one instead. All three models feature U-shaped, 7.25-inch-radius maple necks paired with rosewood fingerboards.
Tone-wise, all three guitars are loaded with vintage-style pups. The Stratocaster and Telecaster feature standard single-coil pickup arrangements and controls, while the P-Bass sports a split-coil pickup wired to a master volume and tone knob.
Gold hardware appointments across the three ‘Midnight’ models accent the Gloss Black finishes, while a Synchronized Tremolo is attached to the Stratocaster’s bridge for a classic Strat look.
The Stratocaster and Telecaster models retail at $799.99 each, while the Precision Bass retails at $899.99. More information at fender.com.The post Fender adds three MIJ models to its ‘Midnight’ range appeared first on The Guitar Magazine.

Demo: The Novo Solus is a lightly relic’d single-pickup beauty