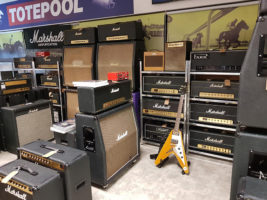 ‘More than 180 exhibitors were packed into the two expansive halls and there was no shortage of gear to see and try and to buy including vintage and modern guitars, amps and pedals and custom masterpieces plus myriad parts, tools and accessories,’ NGS says.

‘From ATB Guitars with possibly the most magnificent collection of vintage guitars for sale at any guitar show in the UK ever, to Zilla with their excellent hand-made speaker cabs, there was something for everybody and there were plenty of sales reported.

‘Major retailer PMT, at their first show in the South, were overwhelmed by the footfall at their stand and reported much better than anticipated sales.

JHS managing director, Dennis Drumm, said: “What a super show! Enjoyable and productive, with some genuinely interesting things to see. Had some useful conversations, bumped into some old friends and even sold some stuff!!”

‘Mike Long from ATB Guitars said, “We had a super busy stand all day from the moment the doors opened and we were very pleased with the response and the organisation.”

Justifying the show’s ‘international’ tag, NGS says that guitar and amp custom builders had made journeys from as far afield as Greece, Italy, Poland, Sweden, Germany, Netherlands, France, Spain and Belgium. ‘There were some amazing custom creations on display from them and from many UK builders including the unique instruments made by Wunnadem Guitars constructed from recycled materials which are truly works of art’.

Next year’s event is scheduled at the same venue on Sunday 27th October 2019.

Neural DSP rounds up “the best clean amps in the industry” for Archetype: Cory Wong plugin

Higher Power: "You can pull guitar ideas from anywhere – even grime music"