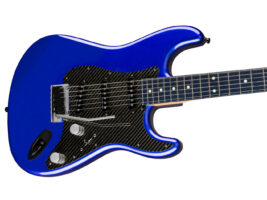 The guitar is limited to 100 teambuilt pieces. It bears a traditional Stratocaster shape, with an alder body and maple neck. From here, however, the specifications take on a far less traditional character. There’s a carbon fibre pickguard with black machine-head screws, Fender’s latest noiseless pickups, two control knobs rather than the standard three, and a polished-blue Richlite fretboard. The ‘board sports stainless steel frets, as well as Luminlay dot inlays that glow blue in the dark. Keeping with the more modern approach, the fretboard has a 12-inch radius.
The “omnidirectional” Structural Blue finish produces light metallic blue to deep midnight blue, and was originally inspired by the Morpho butterfly. It produces a deep, textured effect, with different shades of blue coming through depending on ambient light, how curved the surface is and your viewing angle.
These unique properties are a result of the way the paint achieves its colour: it does not contain any blue pigment. It achieves a blue look by breaking up and interfering with light that hits it, with layers of colourless materials coming together to generate its final look. Hence the “structural” in its name.
Image: Fender
Ron Thorn notes that the Stratocaster was chosen due to the number of different curves and cutaways on the body shape, in order to best highlight how the Structural Blue paint responds to movement.
The paint has been developed over the last 15 years by Lexus’ scientists, and is the same that is found on the limited-edition Lexus LC 500. The hardware is a combination of black and satin chrome, mirroring that of Lexus cars. The control knobs also match the knobs found on the LC500’s audio system.
Vinay Shahani, Vice President of Lexus Marketing, said of the collaboration: “Fender is a legendary brand that has made an indelible mark in the world of music. As such, Lexus is honoured to team with them in the development of this unique guitar that highlights our brand’s unique design cues and Structural Blue paint technology.”
Hear and see the guitar in Fender’s official demo video below.