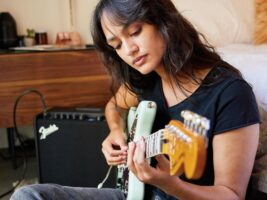 Fender have released the first episode of their Women’s History Month mini-series ‘My Rock’.

The series hopes to highlight inspirational stories from Fender artists on the amazing women in their lives and promotes womanhood and trailblazers in the fender and wider-guitar community.
In a post on Facebook, Fender announced the mini-series, stating that they hope it will celebrate “sisterhood, trailblazers, and the rocks who form the ultimate support systems”.

My Rock: Joy Crookes
Throughout Women’s History Month, we’re highlighting inspirational stories from Fender artists on the amazing women in their lives. Celebrating sisterhood, trailblazers and the rocks who form the ultimate support systems. In the first episode of My Rock, Joy Crookes gives us an exclusive look behind the strong women in her life who have supported her through thick and thin. Check out the full episode below to hear how Joy’s mum, grandma and friends all propel her to be the best version of herself, always. Who are the female rocks in your life? Share your stories with us in the comments below.
Posted by Fender on Thursday, March 17, 2022

The first episode features British singer-songwriter, Joy Crookes who shares the strong women in her life who have supported her, such as her mum, grandma and her friends.
“I take pride in their hustle, their ability to never say the word ‘no’, and to keep going and keep fighting through thick and thin”.
In the video she is also holding an American Professional II Series stratocaster, which she endorsed for the manufacturer in November 2020.
Fender is not the only guitar manufacturer that is celebrating International Women’s Month, as Japanese ESP Guitars published a series of YouTube videos on International Women’s Day (8 March) promoting guitarists Alex S., Böse Fuchs, and Thalia Bellazecca.
In recent years, Fender has been seen to make an effort to appeal to a wider and more female consumer base, with the release of the Fender Player Series offering a new range of colours and lighter body-shapes which are built with female players in mind.
In addition, Fender’s subscription-based learning app ‘Fender Play’, which offered users free access during the lockdown, saw the gender balance on the app go from 70/30 to 55/45 male to female.
The date for the next episode of ‘My Rock’ is yet to be announced, but stay tuned on the Fender Facebook page.
The post Fender release first episode of Women’s History Month mini-series appeared first on Guitar.com | All Things Guitar.