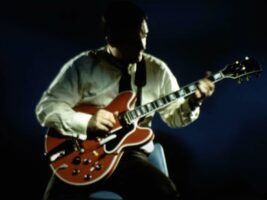 Gibson has released newly-unearthed footage of a factory tour from 1967.
READ MORE: Gibson revives a lost Ted McCarty design from the 1950s with the Theodore
The footage, which features performances of some of the classic Gibson acoustic models, as well as the step by step guide to how the brand builds its famous guitars, was uncovered by Gibson TV producers in late 2020, and digitally remastered.
“In the fall of 2020, Gibson unearthed an unmarked reel while digging through vault archives. Intrigued by the discovery, Gibson TV producers took that reel and had it digitally remastered. The footage you are about to see was shot at Gibson’s Factory in 1967. It has never been seen until now”, reads the video description.
You can watch the full documentary below:

Details of guitar manufacturing are shown in the video, with workers inspecting the individual circuits, and adjusting the adjacent amplifiers. Additionally, it shows the “revolutionary” pick-up coil, one which will create a sound “as modern as tomorrow”.
Interestingly, the video also includes a list of some of their most-used woods for acoustic guitar manufacturing, such Sitka spruce, Michigan maple, mahogany from Central and South America, ebony from Sri Lanka and Rosewood from Brazil, most of which are banned from production today due to laws protecting endangered tree species.
Since the infamous Gibson raid in 2009 and 2011 where armed federal marshals confiscated ‘illegal’ woods used in guitar production, the manufacturer has switched to more sustainably sourced options.
The post Gibson discovers footage of old factory tour from 1967 appeared first on Guitar.com | All Things Guitar.