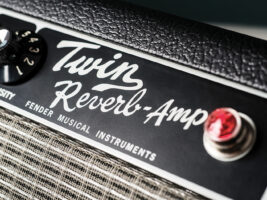 Fender is poised to make more headway in the digital amps world with new products that are more than “just more retro reissues” of its classic tube amplifiers.

READ MORE: How to sound good when recording direct at home

In a new interview, Justin Norvell, Executive VP of Products at Fender, spoke about the legendary guitar brand’s recent attitudes towards digital amplifiers, following the success of the Tone Master series.
“The Tone Master was a move to say, we’re not going to make this digital amp do 100 things pretty well, we’re gonna make it do basically one thing extremely well, and show that you can get to tone with a digital amp” Norvell told MusicRadar. “I think that just blows the doors off and blows everything wide open.”
Norvell revealed that Fender is interested in more than developing digital reissues of its classic tube amp models; what seems to excite the brand now is marrying the two worlds where it makes sense to.
“I think you’re seeing that with other people’s amps as well where there’s IRs in tube amps, and there’s load boxes, and all of these things,” he said.
“Even if you are a tube purist at some point you still probably have to engage it in a way where you’re not turning it to 10 through a 4×12 everywhere you are, and how do you get what you need out of that? And so even the analogue is having a digital bridge, kind of like analogue to digital, kind of conversion.”
“So that’s super exciting to us and I think that the future is that there’s a lot coming that’s going to be very exciting from us on that front.”

Elsewhere in the conversation, Norvell explained that Fender will be delving further into effects pedals, saying “we have some some cool stuff coming towards the middle or end of the year that I think will be really, really cool for everybody to check out.”
The post Fender VP hints at bigger future for analogue-digital guitar amps appeared first on Guitar.com | All Things Guitar.