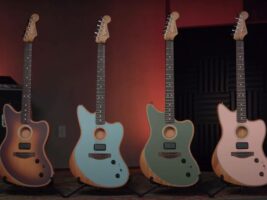 Fender has continued to expand its range of Acoustasonic guitars with the Player Jazzmaster.

Unveiled yesterday (27 October), the new Fender Player design follows the original, American Jazzmaster Acoustasonic, which debuted last March.
Priced lower than its counterpart, the latest innovation continues to offer the full range of potential seen in both acoustic and electric architecture – with a three-way switch to access different voices.
Crafted in the Acoustasonic space within the brand’s Ensenada factory – which builds all of Fender’s other made-in-Mexico instruments – the streamlined and versatile design of the model is ideal for players wanting a hybrid guitar on a budget.
The guitar’s body is a modified Jazzmaster shape, constructed using a mahogany back and sides and a solid A Sitka spruce top. In addition, the rosewood, 12” fingerboard is fitted with twenty-two narrow tall frets.
Find footage of the guitar in action below.

The guitar also employs a dual-pickup configuration – comprised of a Fisherman Under-Saddle Transducer and an Acoustasonic Shawbucker magnet. This can be played solo or blended with acoustic voices for unique tonal characteristics.
A 9-volt battery is included, as well as a master volume dial and a blend knob, which allows players to switch back and forth between clean and driven tones.
The Acoustasonic Player Jazzmaster is available now for $1,199. Users also have the choice of four different colour options: Two-Colour Sunburst, Shell Pink, Antique Olive and Ice Blue.
Last year, Fender introduced the Player version of the Acoustasonic Telecaster into its midst. The first of the Player Acoustasonic range to be launched, the Telecaster design shares many similarities to the newly-launched Jazzmaster model and is now on offer for $1,049.
Find out more about both Fender Player Acoustasonic models on the brand’s website.
The post Fender’s Acoustasonic Player Jazzmaster has launched appeared first on Guitar.com | All Things Guitar.