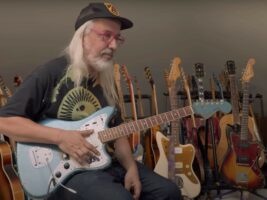 J Mascis has showcased his collection of guitars and revealed that, despite being widely associated with Jazzmasters and Big Muff fuzz, in reality, he rarely uses either in the studio.

READ MORE: Tommy Emmanuel On Why He Doesn’t Like To Be Called The Best Acoustic Player: “Self-Centeredness It’s Such A Bullshit Thing”

Taking part in a new interview yesterday (27 October), Dinosaur Jr. guitarist J Mascis gave Reverb an insight into his collection of guitars and effects pedals. It was here that the musician also confirmed that, out of all of his instruments, it is a Fender Telecaster that his current favourite.
“My first Tele, it’s [from] ’58… this is probably my favourite guitar,” he says, showing off the axe, which he initially customised using a glittery blue drum covering. “This is the Tele, the J Mascis Tele, that I play most all the leads I’ve ever done on. For some reason, I like playing leads on this guitar.”
It was here that the host of the interview presumed that Mascis must use his signature Jazzmaster in the rhythm sections of his studio recordings, and use the Telecaster exclusively for the leads.
“No, usually not…” the artist laughed. “That’s the thing, [in the] studio, there’s hardly ever a Jazzmaster or a Big Muff on any studio recording.”

In the interview, the artist also recalled the obscure reason behind why he first bought a Jazzmaster, stating that while this is the model he is now most associated with, it was a Stratocaster that he first wanted.
“I had 400 bucks and [the Stratocaster I wanted was listed for] $400 in the paper. But when I got there it was $450! I didn’t have the cash,” Mascis admits.
“If I had had 50 more dollars I would have bought this guitar probably,” he says, showcasing a Stratocaster in his current collection. “[But it was] $450 and the Jazzmaster was $300. Finally, after all these years, I’ve got one.”
Earlier this year, J Mascis debuted his new signature stompbox, the Electro-Harmonix Ram’s Head big muff Pi. The distortion pedal is available now for £125, find out more on Reverb.
The post J Mascis admits he “hardly ever” uses a Jazzmaster or Big Muff in the studio appeared first on Guitar.com | All Things Guitar.