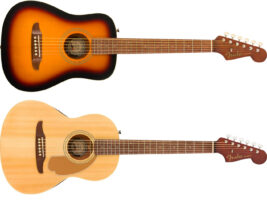 The California Mini series are said to pack “big punch” for small-scale acoustics and are suitable for both beginners and veteran players looking for instruments easy to travel with.
The guitars were announced among a plethora of products from Fender for 2021, including new artist models, effects pedals and a new Tone Master Super Reverb amplifier.
Sonoran Mini
The Sonoran Mini features a mahogany body paired with either a spruce or mahogany top. The guitar has a scale length of 23.3 inches, and comes with a walnut fingerboard and bridge. Other hardware features include a Nubone nut and saddle, six-in-line Strat headstock and a rather uniquely cut pickguard. Finish options include All Mahogany and Natural.
Images: Fender
Redondo Mini
Featuring a slightly shorter scale length of 22.75 inches, the Redondo Mini is built with a spruce top and mahogany back and sides. This model comes in two finishes: Sunburst and Natural and also features a walnut fingerboard and bridge, along with a Nubone nut and saddle.
Images: Fender
Pricing and availability
The California Mini series is expected to arrive later this September. Both models will be priced at £180/$200/€200 and come with a matching gig bag.
The post Fender’s California Mini series are small-scale acoustics that pack a “big punch” appeared first on Guitar.com | All Things Guitar.