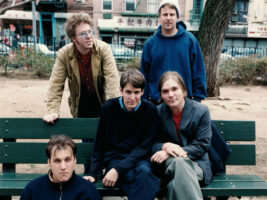 Terror Twilight, the final album by the recently-reunited Pavement, is set to be reissued as Terror Twilight: Farewell Horizontal this April, in a massive 45-track 4LP / 2CD version.

READ MORE: The Genius Of… Slanted and Enchanted by Pavement

The reissued version of the 1999 album features 28 unreleased songs, with the physical LP and CD editions being joined by a book of never-before-seen photographs and commentary from the band members themselves. It will land on 8 April this year via Matador. The unreleased material is a mix of unused songs, rough tracks, demos and live versions.
The announcement follows the news that all five members of Pavement – Stephen Malkmus, Scott “Spiral Stairs” Kannberg, Mark Ibold, Bob Nastanovich and Steve West – will reunite to play their first shows since 2010 this year. The band is set to begin a trek of the US, UK and Europe in September.
Ahead of the release, a video for the never-before-heard track Be The Hook has been released – check it out below.