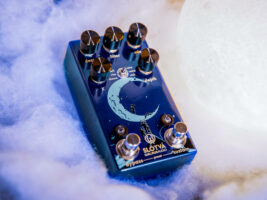 Walrus Audio has released a new version of its Slö multi-textured modulated reverb, the Slötvå. The new update tweaks the pedal’s visuals and adds a bank of three presets.

Slötvå’s primary addition is the preset function. The main bypass LED is joined by a second, colour-changing LED on the other side of the pedal. When both footswitches are tapped at the same time, this LED cycles between green, red and blue to let you know which slot you are on. To save the Slötvå’s settings into a preset, set the controls how you want, and then hold down both footswitches. If the same reverb algorithm is being shared between presets, the sound will smoothly fade into the new settings when the preset is changed.
The Slötvå features the same controls and layout as the original Slö, with controls for decay, filter, mix and modulation depth, as well as an ‘x’ knob which changes function depending on the selected algorithm.
Like the Slö, the central toggle switch is dual-function. When flicked up and down normally, it selects between the pedal’s three reverb algorithms: Dark, Rise and Dream. Dark adds an octave-down pitch-shifted element to the wet signal for an ominous, droning sound. In this mode, the ‘x’ knob sets the level of pitch-shifted signal hitting the reverb. Rise is an auto-swell mode, with the ‘x’ knob setting how long the wet signal takes to swell in after a note is played. Finally, Dream is a full-sounding ambient reverb that makes use of the secondary sustain footswitch. Hitting it will freeze the reverb trail to create a pad, with the ‘x’ knob adding vibrato. Unlatching the pad will cause it to decay in line with the decay time.
The Slötvå’s toggle switch, when flicked up and down with the bypass switch held down, selects between three different pitch modulation waveshapes: sine, warp and sink. Sine is a standard smooth sine wave, warp is an unpredictable and asymmetric wave shape, and sink is an asymmetric descending wave for repeating pitch-dives.
The Slötvå lists for $229. Find out more at walrusaudio.com.
The post Walrus Audio revamps the Slö reverb with the Slötvå appeared first on Guitar.com | All Things Guitar.