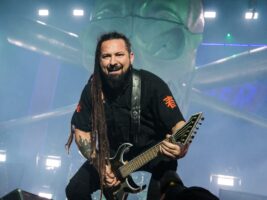 Five Finger Death Punch guitarist Zoltan Bathory has drawn comparisons between his band and Queen as they prepare for their ninth album.

Speaking to Metal Hammer in a new interview, Bathory said that “everyone” knows who Five Finger Death Punch are and what they sound like, remarking, “It’s very difficult to achieve a signature sound, but when you have that, you have nothing to prove and it allows you to venture farther away. Take Queen: you can’t categorise Queen, and that’s the place you want to be, because you can do anything.”
Bathory doubled down on his comparison, adding that his band were starting at the point of venturing further for their upcoming record. Mentioning the pressure to keep repeating what was successful despite wanting artistic freedom, the guitarist continued, “That’s why I mentioned Queen, because those guys didn’t give a shit, they wrote whatever the hell they felt like writing. That’s as honest as music can be.”
Five Finger Death Punch have collaborated with Queen guitarist Brian May before, releasing a cover of 1997 Kenny Wayne Shepard song Blue on Black together in 2019. The cover also featured Shepard and country singer Brantley Gilbert.
May recently reflected on the songwriting talents of his former bandmate in Queen, the legendary Freddie Mercury. “In the beginning, a lot of his writing was very fantastical, but underneath, I think he was really pouring his heart out,” May said. “Freddie was struggling with various things at various times, and we all know that his sexuality was quite fluid.”
“It was hard for him to express. And I think you can hear him in [In The Lap Of The Gods… Revisited], struggling with his relationships, putting them into words and music.”
A previously unreleased song titled Face It Alone featuring Mercury will be out this September. The track comes from the sessions held for the 1989 album The Miracle, Queen’s 13th studio album. The record would become the band’s penultimate album that was recorded with Freddie Mercury before his passing in 1991.
The post Five Finger Death Punch guitarist compares band to Queen: “Those guys didn’t give a shit” appeared first on Guitar.com | All Things Guitar.