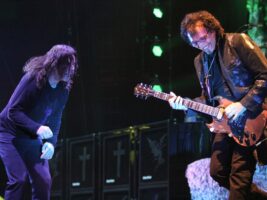 Ozzy Osbourne and Tony Iommi reunited in their hometown of Birmingham, England to perform Black Sabbath classics at the Commonwealth Games closing ceremony.

READ MORE: Heated letter that John Lennon wrote to Paul McCartney is up for auction

Ozzy’s appearance came as a surprise as he was not billed as a performer at the ceremony. Iommi began the performance with the opening riffs of Iron Man as Ozzy bellowed “I am iron man” from backstage, walking out to join Iommi and his band for a rendition of the 1997 Black Sabbath classic Paranoid.
“Thank you, goodnight! You are the best. God bless you all. Birmingham forever!” Ozzy roared as the band finished the song. Watch Ozzy Osbourne and Tony Tommi reunite to perform Paranoid below.

The appearance was also Osbourne’s first public performance since the 2019 American Music awards, where he performed Take What You Want with Post Malone. Osbourne has faced significant health issues in recent years, having only just undergone a crucial neck and back surgery that will “determine the rest of his life” in June.
Osbourne has also recently discussed how he reconnected with Iommi as he underwent treatment for his recent health issues, telling radio station WSFL 106.5, “Since I’ve been laid up these last 18 months, Tony Iommi has been such a support for me. So supportive. I’ve been closer to him in the last 18 months than I ever have been.”
He referenced the past strains in his and Iommi’s relationship, saying: “We never got on for years. But whatever he did before and whatever I did before… it’s so important that when you’re laid up, somebody cares enough to give you a thought. That’s all you need – a phone call or a text. It means the world.”
Ozzy was diagnosed with COVID-19 earlier this year in April. Two years ago, the 73-year-old singer revealed that he had been battling Parkinson’s disease. And before that, Ozzy survived a life-threatening staph infection.
The post Ozzy Osbourne and Tony Iommi reunite to play Black Sabbath’s Paranoid at Commonwealth Games closing ceremony appeared first on Guitar.com | All Things Guitar.