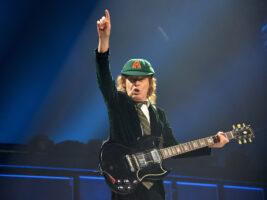 There is perhaps no band more reflective of the pure unadulterated sound of rock ‘n’ roll. Angus Young might be small in stature, but his tone is stratospheric, and set the template for countless other bands, while establishing himself as one of true guitar icons of classic rock.

Angus has never been fond of talking about his gear or tone that much on record, and into that void has been poured a great deal of speculation and conjecture about how exactly the SG’s most famous exponent really gets those iconic guitar sound. Uncertainty breeds mythology, and along the way plenty of incorrect information has passed into common understanding – but never fear, we’re here to correct some of these inaccuracies, and give you a clearer picture of what Angus’s guitar tone is really made of.
Image: Joey Foley / Getty
Angus Young used Marshall JTM45s
On Highway To Hell and Back in Black, Angus used a combination of his favourite amp, a 1970s four-input 100-watt 1959 Super Lead, along with another amp that many have mistaken for a JTM45, but it was actually the very rare Marshall JTM50 (made between 1966 and 1967). The JTM50 was an often-forgotten transitional amp between the JTM45 and the Plexi JMPs.
There are many places online that will claim Angus used a JTM45 for those records, but that is wrong – JTM45s differ sonically from JTM50s in that they are not as tight and responsive as their solid-state counterparts and their bass response is quite undefined, saturation levels are also different on the JTM50 compared to the JTM45. For these reasons, Angus always preferred the JTM50. Because the JTM50 was a transitional amp, some came from the factory with tube rectifiers and some with solid-state – Angus used the ones with solid-state, which resulted in a tighter, punchier response than those with a tube rectifier.
The reason for the confusion is that Angus was seen on stage with JTM45s, but according to [SoloDallas owner] Fil Olivieri, some of those amps had been converted over to JTM50 specs. This was done due to the scarcity of JTM50 amplifiers. That is not to say that Angus has never used a JTM45, as he does own several of them and does use them in the studio from time to time, in conjunction with other amps, but the JTM50 is what you’re hearing on those records.
Photo: Kevin Winter / Getty Images
Angus Young doesn’t use effects
In an interview with Guitar Player in 1984, Angus was asked if he used any effects [on the Back in Black album], to which Angus responded, “I just have a Schaffer-Vega wireless system.” He was asked about it a month later in Guitar World and he elaborated, “Yeah, I use the Schaffer-Vega. I’ve been using that since ’77. On the receiver you’ve got like a monitor switch you can boost the signal and in the transmitter, you’ve got the same sort of thing. You can really give a guitar hell with ‘em. I have used the remote in the studio and it worked really good.”
The Schaffer Vega Diversity System (SVDS) was the first wireless unit ever created (circa 1975), by a genius of a man, Ken Schaffer. The unit allowed artists the freedom to roam the ever-growing stages in the 70s without the need for unwieldy long leads. KISS bought their SVDS units as a safety measure shortly after Ace Frehley was electrocuted on stage in 1976 and later found out it was pretty handy for some of the more ambitious onstage stunts (flying out over the crowd on cables…etc). Schaffer stopped making the units around early 1982, and went on to invent wireless monitors for Pink Floyd so that they could perform The Wall live, and many other inventions.
Now, today’s wireless units pride themselves on maintaining the integrity of the guitar tone, but the older technology in the SVDS altered the tone in some unintended, but fantastic ways. That’s why Angus used the wireless unit while in the studio, as did several other artists of that era including David Gilmour, Eddie Van Halen, and Peter Frampton.