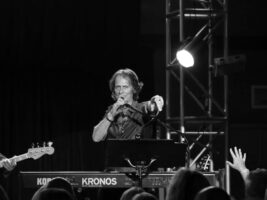 Longtime Fleetwood Mac keyboardist Brett Tuggle has passed away at 70 due to complications arising from cancer.
Tuggle’s son Matt confirmed his father’s death in a statement to Rolling Stone, saying, “He was loved by his family so much. His family was with him throughout the entire time of his illness. He was a lovely father. He gave me music in my life.”
Besides the 21 years he spent with Fleetwood Mac in their reunion era, Tuggle’s storied career also includes stints with Jimmy Page, Rick Springfield, David Coverdale, John Kay and Steppenwolf, Styx’s Tommy Shaw, and Mitch Ryder and the Detroit Wheels – and of course, his time as a founding member of the David Lee Roth Band, where he famously co-wrote Just Like Paradise with Roth.
Tuggle was ousted from Fleetwood Mac alongside Lindsey Buckingham in 2018. Ever the peacemaker, Tuggle told Rolling Stone at the time, “I thought it was fine with everybody for a minute.”
“In the end, I think, Stevie [Nicks] thought I was more in Lindsey’s camp. But I tried to be Switzerland to all the principles in the Mac. I felt like that was my job.”
Tuggle would join Buckingham on tour last year, but was absent from the lineup when the tour began again earlier this year. Buckingham told the audience on his 5 April show in San Francisco that Tuggle was dealing with a “health problem” and thus would not be able to join them.
Springfield paid tribute to Tuggle on Twitter following the news of his passing breaking, writing, “Our sweet Brett Tuggle made it home tonight. God bless his beautiful spirit.”
The post Fleetwood Mac keyboardist Brett Tuggle dies at 70 after struggle with cancer appeared first on Guitar.com | All Things Guitar.