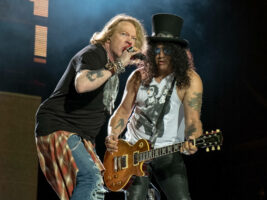 Watch: Guns N’ Roses play Street of Dreams with Slash and Duff for the first time

Guns N’ Roses brought back a deep cut from Chinese Democracy while on the road in Prague, Czech Republic with a decade-first performance of Street of Dreams.

Axl Rose and co last played the song in December 2012 with a lineup that did not include Slash, Duff McKagan and keyboardist Melissa Reese, making it the first time the artists had tackled the song live as well.
The 30-song setlist from the Prague show includes other deep cuts that have made a comeback for the first time in years on this tour, including Reckless Life and You’re Crazy – the Appetite for Destruction version, of course.
Watch footage from YouTuber Daniel Sztomber below:

The setlist also included their cover of AC/DC’s Walk All Over You, from their 1979 album Highway To Hell, which they first debuted at a show in Portugal earlier this month. That show was also the first performance of Reckless Life since 1993 and the Appetite for Destruction version of You’re Crazy for the first time since 1991.
Guitarist Slash has said that new music from Guns N’ Roses is coming soon in an interview where he revealed that the band have been hard at work on a new studio album. “There’s new Guns material coming out as we speak, and we’ll probably keep putting it out until the entire record’s worth of stuff is done and then put it out solid,” he said. “It’s cool. I’m enjoying working on the stuff and having a good time doing it.”
The band’s last LP, Chinese Democracy, came out in 2008 and only featured frontman Axl Rose as the last remaining member of their original lineup.
Last year, Guns N’ Roses released two singles, Absurd and Hard Skool, which were recorded – but not written with – Slash or McKagan. A four-track Hard Skool EP, which includes both singles, along with live takes of You’re Crazy and Don’t Cry, is set to release on 22 February 2022.
The post Watch: Guns N’ Roses play Street of Dreams with Slash and Duff for the first time appeared first on Guitar.com | All Things Guitar.