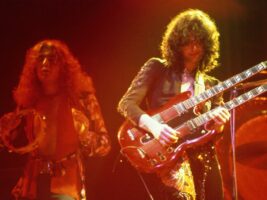 A new 23-minute recording from Led Zeppelin‘s 1975 show in Maryland has emerged online thanks to a fan who snuck an 8mm film camera in.

READ MORE: Clips of an unheard Led Zeppelin show from 1971 are emerging online

The footage was posted on Led Zeppelin archivist YouTube channel ledzepfilm, and is the second piece of film to come out of this show – but is also the first to contain more than just Heartbreaker. Kashmir, Heartbreaker and Trampled Under Foot are among the hits Led Zeppelin played at this show, which can now be watched below.

The film of the show was submitted to ledzepfilm by Jimmy Nalley, a concertgoer who snuck his Super 8 camera into the Sky Suite #1 at the Capital Centre. The channel also notes that the audio is synced with the audience recordings as opposed to the soundboard as “the soundboard reveals much more than a few flaws”.
Two clips each less than 2 minutes long from a performance of Whole Lotta Love during the band’s 1971 show in Vancouver, Canada were posted on Led Zeppelin’s fan forums by a user going by the handle Spindle recently, making this the second piece of archival footage to emerge from Led Zeppelin’s undocumented shows in recent times.
Underground Japanese label Tarantura — which specialises in bootleg recordings — recently also announced on 16 May that it will release a bootleg recording of Led Zeppelin’s 4 May, 1971 performance in Odense, Denmark.
The recording supposedly includes a 4 May, 1971 audience recording of a live performance of Four Sticks, which is expected to be the highlight. There is currently only one known recorded live performance of the song from the audience tape of the band’s previous night in Copenhagen.
The post Over 20 minutes of unseen footage from Led Zeppelin’s 1975 Maryland show has surfaced appeared first on Guitar.com | All Things Guitar.