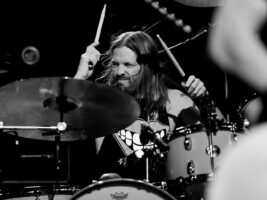 Taylor Hawkins, best known as the drummer of Foo Fighters, has died, according to a statement from the band. He was 50.
Foo Fighters announced the news on Friday (25 March), but did not provide a location or cause of death. “The Foo Fighters family is devastated by the tragic and untimely loss of our beloved Taylor Hawkins,” the group’s statement read. “His musical spirit and infectious laughter will live on with all of us forever.”
The Foo Fighters are currently on tour in South America and were slated to perform at the Festival Estéreo Picnic in Bogotá, Colombia yesterday (25 March).
Read the full statement below:

Taylor Hawkins was born in Fort Worth, Texas, in 1972. He was the touring drummer for Sass Jordan and Alanis Morissette before joining Foo Fighters in 1997. Except for the band’s eponymous debut from 1995, Hawkins has recorded on every one of the band’s studio albums from 1997’s The Colour And The Shape to Medicine At Midnight, which released last year.
Outside of the Foos, Hawkins featured on Brian May’s 1998 album Another World and Slash’s 2010 self-titled debut album. He also performed with Coheed and Cambria, Taylor Hawkins and the Coattail Riders, and The Birds of Satan.
Hawkins’ last release with the Foo Fighters was Dream Widow, a companion EP to the band’s metal-horror film project, Studio 666, based on a story by frontman Dave Grohl.
Collaborators and friends have begun paying tribute to Hawkins. KISS guitarist Paul Stanley tweeted, “Speechless and gutted. Taylor was a great guy, a dad and a husband”, while Rage Against The Machine’s Tom Morello saluted Hawkins’ “unstoppable rock power”.
Read some of the tributes below:

Speechless and Gutted. Taylor was a great guy, a dad and a husband. My heart goes out to them, Dave and the band. What awful news. https://t.co/uQdl04etlp
— Paul Stanley (@PaulStanleyLive) March 26, 2022

Taylor Hawkins was a terrific drummer with a gorgeous disposition, seemed always to be having the time of his life. I didn’t know him well but I know music is lessened by his passing, made duller and smaller. Requiescat.
— steve albini (@electricalWSOP) March 26, 2022

In utter disbelief at the news of Taylor Hawkins. Our deepest condolences to his family, his bandmates, his team, his friends and everyone that was ever touched by the music he created with @foofighters @Alanis and so many others. This is so incredibly sad. pic.twitter.com/2AUeqpaN94
— Nickelback (@Nickelback) March 26, 2022

In absolute shock & disbelief over the the passing of Taylor Hawkins. I’ve always had so much admiration for him. Amazing drummer & a gem of a guy who was always fun to be around. I’m absolutely gutted…my deepest condolences to his bandmates & family #RIPTaylorHawkins pic.twitter.com/a3X0k2AqYW
— Mike Portnoy (@MikePortnoy) March 26, 2022

. @TaylorHawkins was truly a great person and an amazing musician. My heart, my love and my condolences go out to his wife, his children, his family, his band and his fans. See you on the other side – Ozzy
— Ozzy Osbourne (@OzzyOsbourne) March 26, 2022

God bless Taylor peace and love to all his family and the band peace and love. pic.twitter.com/wn2izxn4Vd
— #RingoStarr (@ringostarrmusic) March 26, 2022

This is a developing story.
The post Foo Fighters drummer Taylor Hawkins has died at 50 appeared first on Guitar.com | All Things Guitar.