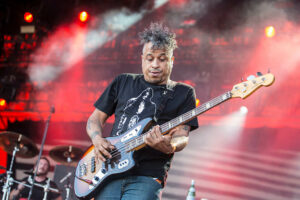 Former Deftones bassist Sergio Vega reveals why he split with the band, says it was “never about money, but a sense of belonging”

Following news of his sudden split from Deftones last month, Sergio Vega has now spoken out about the circumstances leading up to his departure. In a recent interview, the musician admitted that his reasons for parting ways with the band were “never about money”, but instead about his need for “a sense of belonging”.

News of the bassist’s departure first landed on March 9, in which the musician took to social media to share a video explaining his perspective on the split. In the Instagram video, Vega detailed the contractual issues that created a rift between himself and the members. Here, he described how he felt forced to stay on a temporary contract, whilst the band’s keyboardist and turntablist Frank Delgado was promised to eventually become a full-time member.
Now, in a recent interview with the Talk Toomey Podcast, Vega elaborated further on his role in the band and how internal disagreements about contracts led to them parting ways.
Discussing his eagerness to become a permanent member of Deftones, Vega stated:
“It started to become more of a thing of, ‘Hey, I would really like to belong to this.’ Whenever it would come up, it was more like they were good with the status quo.” He continues, “But it was not financial ’cause they were like, Oh, here’s more money, here’s a raise. It was never about money, it was about a sense of belonging.”
Vega first joined the band a year after the band’s long-standing bassist Chi Cheng suffered a career-ending car accident in 2008, an incident that would leave him semi-comatose until his passing in 2013.
Detailing how the band refused to reinstate him as a permanent member after his temporary contract ended, Vega admits that it was this impasse that was the sole reason for his departure.
“Ultimately, in parting ways, it was not a function of me trying to renegotiate during the pandemic. It was a function of the contract being cancelled.” Vega elaborates, “When they wanted to reinstate [the contract], I was like … ‘Now would be the time to get off of this type of structure because it’s not really working for anybody. … It’s been 12 years at this point, let’s make good on that.’ … And that was it. We couldn’t really come back on that.”
Image: Daniel Boczarski/Getty
Speaking with Podioslave in another recent interview, Vega expressed an appreciation for his time in Deftones and reflects back on the context in which he joined the band.
“Deftones were old friends by that point. We met on the first Warped Tour; I had filled in for Chi in 1999. To come in at that crossroads, having that perspective … was not lost on me.” He reminisces, “It was something that I had a lot of appreciation and value for, and I made sure to bring the best of myself.”
In the time since his departure from the alternative metal act, Vega has continued to work with Quicksand, a band he has been involved with since the early 1990s. In addition, the musician is also currently pursuing a new musical collaboration with Spotlights drummer Chris Enriquez – a project that is reported to feature a different vocalist on each track.
Looking forward to this new chapter in his career, Vega told Podioslave:
“[It is a] cool project where it’s a single bass thing. It’s the idea of like, especially now, focusing on Quicksand — the band that I’ve been with a good chunk of my adult life and all of my career, and being someone who’s just kind of prolific in general and wanting to write. I’m always home demoing, I’m always doing stuff.”
Last week it was announced that former Marilyn Manson bassist Fred Sablan has filled in Vega’s place as bassist in the Deftones’ lineup.
The post Former Deftones bassist Sergio Vega reveals why he split with the band, says it was “never about money, but a sense of belonging” appeared first on Guitar.com | All Things Guitar.