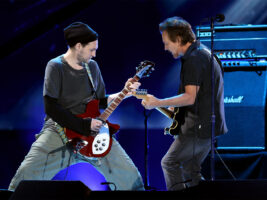 Guitarist Josh Klinghoffer has joined Pearl Jam as a touring musician, performing with the band at the Sea.Hear.Now festival in New Jersey’s Asbury Park over the weekend (18 September).

READ MORE: “The secret is in the years of playing Even Flow on it 700 times”: Pearl Jam’s Mike McCready on capturing the magic of his new Custom Shop Strat

The former Red Hot Chili Peppers guitarist joined Pearl Jam for the entirety of their 20-song set, tackling guitar, backing vocals and percussion. At the gig, the band performed a number of songs from their latest album Gigaton on stage for the first time.
Watch footage from the show below:

A Pearl Jam representative confirmed to Consequence Of Sound that Klinghoffer’s role as a touring musician is ongoing.
Klinghoffer was let go from the Red Hot Chili Peppers in 2019, when former guitarist John Frusciante returned to the fold. At the time, Klinghoffer called his dismissal a “complete shock but not a surprise”.
“It’s absolutely John’s place to be in that band. So that’s why I’m happy for him, I’m happy that he’s back with them,” he added.
Earlier this month, Pearl Jam frontman Eddie Vedder released Long Way, the first single from his upcoming solo album Earthling, which featured Klinghoffer on guitar and piano, as well as Chad Smith from the Chili Peppers on drums.
The post Former Red Hot Chili Peppers guitarist Josh Klinghoffer joins Pearl Jam’s live lineup appeared first on Guitar.com | All Things Guitar.