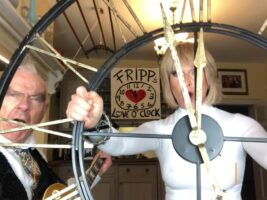 Sunday Lunch, the covers series featuring Robert Fripp and Toyah Wilcox, is back – in the kitchen for a cover this week is the Black Keys’ track Lonely Boy.

READ MORE: Robert Fripp and Toyah are Too Drunk To Funk in new Dead Kennedys cover

The cover features some rare backing vocals from the King Crimson guitarist, while Toyah Wilcox wields the rather existential prop of a gigantic metal clock that eclipses the entire screen.
For good measure, the video also throws in some bloopers and outtakes of the pair’s attempt to cover the track. “This weekend we are back in the FrippCox kitchen and we have a true treat for you… WATCH TILL THE END!!”, Wilcox captioned the video.
Take a look below.

At the beginning of the month, we got our first look at In the Court of the Crimson King, a new King Crimson documentary that follows Fripp and co across the band’s 2018-2019 tour. It includes in-depth interviews with Fripp, as well as with many ex-members, charting the history of the band and its lineup.
“We have been approached by various broadcasters, but felt that the ‘standard talking head’ format was becoming increasingly cookie cutter and uncreative,” band manager David Singleton said in a statement to Rolling Stone.
“We therefore approached Toby Amies, an independent filmmaker, and asked him to make an original music documentary, to reimagine the format, and gave him complete creative freedom to do so. So the film is really sanctioned by the band only in as much as they set the ball rolling and gave Toby the access and interviews he requested. Thereafter they happily ceded all creative control.”
The post Fripp and Toyah are Lonely Boys with new Black Keys cover appeared first on Guitar.com | All Things Guitar.