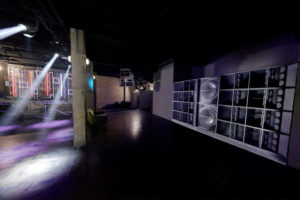 A new venue in London’s East End is focusing on “technical perfection” according to its team, installing a Funktion-One Evo system to stand out on the electronic music scene.

Launching at the beginning of 2018 with a 27-hour New Year’s Eve launch party, E1 occupies a two-room converted warehouse space.

The brainchild of Yuval Hen and Oren Arush, the venue is an evolution of the founders’ existing Studio Spaces facility – an events and high-production photo shoot destination catering to used by fashion and film brands. Having already run a series of successful warehouse style parties over the past few years, the team wanted to hone their offering; redesigning the space to place the focus on “audio excellence” and a heightened consumer experience.

Marketing manager Tim Hinson explained: “We decided to create a space that was the combination of a rough and ready warehouse space with the luxuries of a full club, while still retaining a blank canvas feel – something we felt London was lacking.”

Taking inspiration from iconic clubs such as Trouw, The Cross, Tresor and The End, Hinson wanted to ensure the new venue could tap directly in to their guests’ emotional state. “People’s experiences – whether it be in a club, at a football match or in a restaurant – are all based upon their senses,” noted Hinson. “We feel that a good clubbing experience is based predominantly around the sense of sound; for the optimum experience in a club, there has to be a great level of sound quality.

“When it came to choosing permanent sound systems to suit the programming of the space, there was no other option [than Funktion-One].” says Hinson.

Collaborating with Sound Services, and headed by Curt Gilmore and Rich Cufley, a bespoke Funktion-One system for both the main warehouse space and the smaller ‘Black Studio’ room has been installed – the latter undergoing a complete redesign based around the audio installation, DJ and dancefloor.

The two five-way systems feature the most recent loudspeaker innovations from Funktion-One, including Evolution 6 mid-highs and the BR132 32-inch bass reflex enclosures.

The systems are powered by Full Fat Audio FF10000 and FF6004 amplification, with digital signal processing from XTA Electronics XO4A/DP448 – all designed and built in the UK. DJ Monitoring in both rooms is provided by the Funktion-One PSM318s.

“When it comes to sound, we all know that there’s not anyone quite like Rich Cufley,” said Hinson. “Like us, Sound Services are constantly aiming for perfection and, despite some challenges we’ve faced together, it has always been a constant pleasure working with Rich, Curt and the rest of the Sound Services team.”