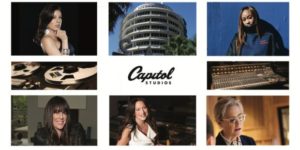 Women’s Audio Mission (WAM), a San Francisco-based nonprofit dedicated to the advancement of women in music production and the recording arts, is presenting the organisation’s first-ever recording arts conference for women in Los Angeles on June 9, 2018 at the legendary Capitol Studios.

Women’s Audio Mission trains over 1,500 women and girls a year in the recording arts to address the critical lack of women in the audio industry (less than 5%), and will be bringing their award-winning curriculum to Los Angeles for the first time for WAM @ Capitol. The conference will include presentations, discussions, and interactive workshops on topics ranging from mixing, beat making, and mic placement to the music business and will be followed by a networking reception. WAM @ Capitol has already been featured in Variety and Music Business Worldwide.

The conference is open to women (transgender and cisgender), non-binary and gender non-conforming individuals. Those interested in attending can learn more about the event, panelists and workshop leaders, and purchase tickets here.