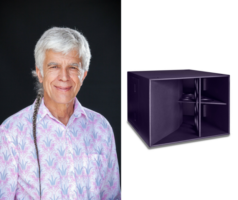 The F124 bass has been in development for two years

Loudspeaker manufacturer Funktion-One will introduce its new F124 bass enclosure to the European market at Prolight+Sound in Frankfurt (April 10-13).

First introduced at the NAMM Show in January, the speaker combines Funktion-One’s horn-loading technology with a 24-inch driver.

By re-visiting a 24-inch frame and tooling the company had developed during a previous R&D phase, Funktion-One focused specifically on the magnet and coil elements.

Founder Tony Andrews (pictured) and the Funktion-One design team worked closely with Precision Devices to find the best performing solution, eventually developing a double six-inch voice coil motor with a Bl factor of 50 to give the necessary motive power. According to Funktion-One’s team, this is now the most powerful electromagnetic structure in a loudspeaker.

This combination of mid-bass speed and impact with low-bass extension from a single enclosure makes the F124 a great partner for the company’s Evolution systems and other Funktion-One mid-high speakers.

“It’s probably the best all round bass device on the planet,” said Andrews. “Everyone who has experienced it has been blown away. It was quite a long development process – around two years – but that attention to detail has returned a fantastic result.”

He continued: “The fact that it’s horn-loaded means that its output is solid and precise. At this sort of size, most other manufacturers use bass reflex technology, which gets a completely different result. I believe we’re the only company doing anything that is genuinely different that works, and with the addition of the F124, I feel that we’ve got a complete range of the highest performing bass speakers on the market.”

It will also host outdoor demos at the live sound arena, featuring an Evo configuration with a central position of six newly launched F124 bass enclosures.