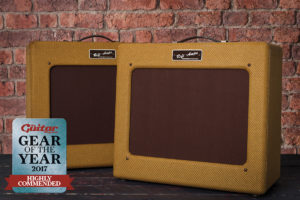 If money is no object in your pursuit of tonal nirvana, you’ve really never had it so good. 2017 saw amp builders big and small pulling out all the stops in the quest to capture perfect vintage tones, and push the envelope of high-end versatility…
Winner
Two-Rock Classic Reverb Signature
• Price £4,299
• Reviewed April 2017
• Contact Coda Music 01438 350 815 www.two-rock.com
With design genius Bill Krinard back in the Two-Rock fold, fans of the boutique amp builder were on tenterhooks to see what the renewed partnership would produce – and they weren’t disappointed.
In many ways, the Classic Reverb Signature saw Two-Rock return to what made it one of the kings of the modern boutique boom – making stunning and immaculately built big-bottle tone machines inspired by Alexander Dumble’s near-mythical creations. With exceptional sonics, a wide gain range and outstanding touch dynamics, the Classic Reverb Signature is worth every penny of its top-end price.
We said “It’s undoubtedly one for the discerning and well-heeled player, but the Classic Reverb Signature is the sort of amplifier that could be a real game-changer”
Highly Commended
Fender ’57 Custom Pro-Amp
• Price £2,299
• Reviewed June 2017
• Contact Fender EMEA 01342 331700 www.fender.com
We said “Full and fat tweed tones both clean and dirty. With the right guitar this is a stunning sounding amp”Rift Amplification Tweed 15TV
• Price £1,514
• Reviewed October 2017
• Contact Rift Amplification 07480 067871 www.riftamps.com
We said “With a fat and chewy midrange and a sweet treble, the 15TV is a highly convincing, killer-sounding 5A3 Deluxe replica”Stone Deaf SD30
• Price £1,749
• Reviewed July 2017
• Contact Stone Deaf Effects & Amplification 01706 882486 stonedeaffx.com
We said “This is a great-sounding EL84 combo, whether or not you’re ready for the futuristic functionality that’s also enclosed”The post Gear Of The Year 2017: Best Guitar Amp Over £1,000 appeared first on The Guitar Magazine.

Watch: Get up-close with the PRS Silver Sky Maple Neck at NAMM 2020

Watch: PRS explains why it brought the McCarty 594 to the affordable S2 range