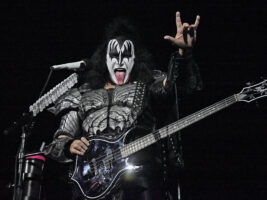 KISS bassist Gene Simmons has again railed against the anti-vaccine movement, calling their stance “delusional” and “evil,” and comparing it to the belief that the Earth is flat.

READ MORE: Gene Simmons tells sceptics: “Get your goddamn COVID shot… you don’t have as many rights as you think!”

Simmons made the comment in a new interview with TalkShopLive, when he was discussing how he managed to safely organise a KISS Kruise in 2021, which had a requirement for attendees to be vaccinated.
“I don’t care about your political beliefs,” he said. “You are not allowed to infect anybody just because you think you’ve got rights. That [is] delusional.”
To clarify, vaccinated people can still transmit COVID-19, however at a much lower rate than unvaccinated people. They are also far less likely to be hospitalised by the virus.
Simmons then repeated a comparison from his last tirade against the unvaccinated, saying: “Of course you don’t have the right to go through a red light. The government has the right to tell you to stop.”
“I don’t want to risk my life just because you want to go through a red light, with this whole idea – this delusional, evil idea – that you get to do whatever you want, and the rest of the world be damned. It’s really terrible.”
“If you’re willing to walk among us unvaccinated, you are an enemy,” Simmons added dramatically.
He then set his sights on the more conspiratorial movements that overlap heavily with the anti-vaccine movement. “There are those that don’t believe this is real. Over five million human beings have died from COVID-19, I know there are – like the Flat Earth Society – people who believe all sorts of things. They died because they were fat or because they smoked. No, bitch, they died because they got COVID.”
Simmons also decried how the issue of COVID “has become political. Unfortunately, the far left and the far right are both evil. They both spread all kinds of nonsense. I don’t like either one of them. Politics are the enemy. Humanism and humanity are what we should all be concerned about. Love thy neighbour as you would yourself.”
Simmons isn’t the only rocker to have strong opinions on vaccination. Eric Clapton has also voiced his opinion on the shot. Having gone through a bad bout of side effects he told his story to an anti-lockdown video production company in a lengthy interview, during which he repeated baseless claims about the vaccine’s effect on fertility and stated that the government’s messaging in aid of vaccination efforts was “propaganda.”
The post Gene Simmons says “delusional, evil” unvaccinated people are the “enemy”, compares them to flat-Earthers appeared first on Guitar.com | All Things Guitar.