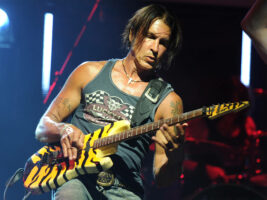 George Lynch has given his reason as to why he’s decided to revive the Lynch Mob band name, despite having previously changed it to Electric Freedom and labelling Lynch Mob “inexcusable” following surge in Black Lives Matter protests in 2020.

It was noticed that he was performing under the name once again throughout October this year, despite having previously branded it as “problematic”. Now, in a new interview with Full In Bloom, Lynch has discussed why he made the decision to start using the band name once again.
He said, “[Lynch Mob is] just a brand I’d established for decades, obviously – over three decades. Nothing’s perfect, and I’ve gotta just live with the fact that it has some negative connotations that I probably have to continue explaining for the rest of my life, and I don’t mind doing that.”
He went on to explain, “I really felt, when I adopted Electric Freedom, that I was really going against the grain more than keeping the old name. I really felt a lot more resistance than I’d ever felt having Lynch Mob; that was actually the reality of it. Nobody really liked it. And I didn’t like living with that; it was just kind of uncomfortable.
“It’s a brand. I mean, nobody wants Coke to change their recipe. Just stay the same, and that’s what you built over the years. Why would you…?” He argued. “‘Why would you change it’ is a rhetorical question. Why I’m probably not more successful in some ways in my career is because I followed my aspirations musically rather than sometimes being smart about just sticking to the plan. [Laughs]”
Lynch has been performing with Jimmy D’Anda (Bulletboys) along with Tantric bassist Jaron Gulino, and singer Gabriel Colon since bringing the name back into use.
The post George Lynch explains why he’s revived Lynch Mob band name after calling it “inexcusable” appeared first on Guitar.com | All Things Guitar.