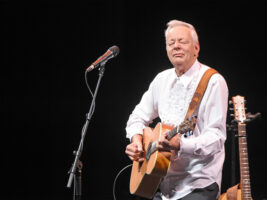 Tommy Emmanuel on why he doesn’t like to be called the best acoustic guitar player: “Self-centeredness – it’s such a bullshit thing”

Tommy Emmanuel has revealed he doesn’t like being regarded as the best acoustic guitar player, having explained that “self-centeredness” often “destroys a lot of people”.

Known as one of the greats due to his complex fingerstyle techniques, the Australian guitarist has had a long and successful career as a session musician and solo artist.
But despite the fact he’s so highly regarded by fans and fellow musicians alike, Emmanuel has opened up on how he feels about being labelled and one of the best, if not the best, acoustic players out there.
In an appearance on Beyond The Vibe podcast, Emmanuel was asked what it feels like to have so many people regard him this way. He replied, “I never think about stuff like that, ever. Never. No, of course not. Because, I don’t want to be up in that space. I’m just like everybody else.”
He later referred to someone believing they’re the greatest as an “awful ball and chain” for somebody to carry around. “I can’t play like Steve Vai or Joe Satriani. I can’t do that kind of thing. And I love it, and it blows my mind, but I have to be trying to do the best with what I have,” he explained. “I don’t want anything to be holding me back, particularly pride, ego, all that stuff. Self-centeredness – it’s such a bullshit thing. And it destroys a lot of people, you know? Since when do we care what other people think of us?”
The guitarist went on to conclude, “You know, I’m just a human being like everybody else. And, first of all, I’m grateful to be in music. I’m grateful for my health. I’m grateful for my family. And I’m grateful for the respect that people treat me with, because a person needs to be treated the way you treat others.”
You can get tickets to see Tommy Emmanuel on tour at tommyemmanuel.com.
The post Tommy Emmanuel on why he doesn’t like to be called the best acoustic guitar player: “Self-centeredness – it’s such a bullshit thing” appeared first on Guitar.com | All Things Guitar.