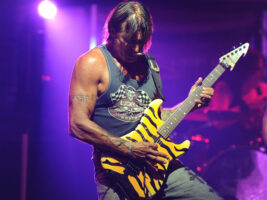 George Lynch has been performing under the band name of Lynch Mob again, after he had previously retired the name in 2020 branding it as “problematic”.

READ MORE: John Petrucci on reunion with Mike Portnoy on stage: “The first song you get a little jittery, and then it kind of disappears”

The guitarist has been performing under Lynch Mob at shows in Hinton, Oklahoma and Santa Fe, New Mexico in October this year. He has been joined on stage by Jimmy D’Anda (Bulletboys) along with Tantric bassist Jaron Gulino, and singer Gabriel Colon (according to Blabbermouth.net).
Last year, Lynch announced a new line-up of musicians under the band name of Electric Freedom after putting the name Lynch Mob to rest. The decision followed the murder of George Floyd by a police officer in 2020, and the ensuing Black Lives Matter protests, due to the name’s connection to racially-motivated violence and murder.
Lynch said at the time in an interview with Audio Ink Radio, “The name itself, of course, has always been problematic, and now it’s inexcusable to keep the name.” He continued, “So, things have just sort of all conspired. A lot of different events triangulated to this point where it just makes sense on every single level to just let it go and wrap it up with a nice neat bow with this record and move on.
“I’m not gonna tour anymore with that name or put out any more records with that name. I’ll probably still play with some of the same people; we’ll just call it something else,” he concluded.
The original return of Lynch Mob was first reported by Metal Sludge at the beginning of October, but there has been no official comment from Lynch himself as to why he has decided to bring the name back, despite his description of it being “inexcusable”.
The post George Lynch performing under Lynch Mob name again, despite declaring it “inexcusable” appeared first on Guitar.com | All Things Guitar.