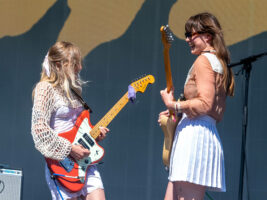 Wet Leg tease that next album will be “longer, bigger, better”

On the red carpet at The Mercury Prize 2022 last night, (October 19) Rhian Teasdale and Hester Chambers spoke to NME where Chambers joked “Completed it, mate! Just kidding!” on the progress of their new music.
Teasdale then added it will be “like the last one, but longer, bigger, better, faster, stronger and more fluorescent.” She also spoke of the surreal experience of having their songs covered by Harry Styles and Pearl Jam adding, “It’s just strange when people know that you exist, who you wouldn’t have thought would know you exist, it’s pretty wild.”
The pair are set to embark on a tour with Styles next Spring. Their debut self-titled record saw them shoot to popularity, and earned them a dazzling 10/10 from us at Guitar.com. Their quirky lyricism references pop culture (“Is your muffin buttered?” from huge coming-of-age film Mean Girls), cracks some cheeky jokes (“I went to school and I got the big D”) and encourages listeners to release their longest and loudest scream.
Wet Leg also teamed up with Fender for a Player Plus session last July, which saw Chambers behind a Cosmic Jade Strat and Teasdale with the Meteora HH as they played tracks Wet Dream, Oh No and Ur Mom.
In an interview with us last May, Wet Leg told us about the process of recording their debut, noting they’d recorded their guitars together. “Previous recording experiences I’ve had have always been quite nerve-racking when someone presses record and it’s just you, and everyone is waiting for you to record this perfect take,” Teasdale explained. “So recording guitars together took the pressure off and made it more imperfect, in a good way.”
Although nominated for The Mercury Prize, they ultimately lost out against winner Little Simz for her album, Sometimes I Might Be Introvert.
You can listen to Wet Leg’s debut album below:

The post Wet Leg tease that next album will be “longer, bigger, better” appeared first on Guitar.com | All Things Guitar.