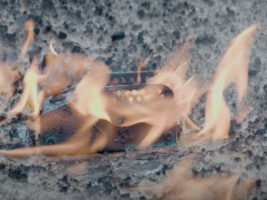 Are ThorpyFX’s pedals really bombproof? Watch one getting blown up to find out

Ever wondered if your pedals are quite literally “bombproof?” Well, founder of Thorpy FX, Adrian Thorpe, put it to the test.

READ MORE: Hugh Cornwell doesn’t get relic’d gear: “I mean, the guitar is made to look like it’s been used, and it’s battered and beaten up. And suddenly, it’s 10 times the price?”

In a new video on the revived Six String Tales YouTube Channel (following a three year hiatus during the pandemic), Thorpe explained how he used to work for the British Army as an explosives specialist, “It’s probably well known at this point that I had a previous career as an Ammunition Technical Officer.”
He went on to add, “Now that has carried on into the pedal world because what’s ended up happening is when we’ve released a pedal people, have used the terminology ‘bombproof’ as a nod to my past and a nod to the build quality.”
Pedals from ThorpyFX were then blown up (in a controlled environment) by Alford Technologies and it is noted in the video description that all pedals were redundant enclosures that were already damaged beyond being saleable, so nothing has gone to waste.
Although it’s pretty hard to tell which pedals were used following the damage, it looked as though The Bunker and The Peacekeeper may well have been two that fell victim to the ruthless explosions.
At the end of the video Thorpe says, “the conclusions are, pretty much no pedals are bombproof.” Though there are some nice shots of some charred remains, which could be argued is still pretty impressive.
You can watch the full video below:

Back in September, Thorpy FX teamed up with Victory to launch a range of pedals inspired by the tones of their iconic amps. ​​The Victory V1 series offered five new pedals, based on the Duchess, Jack, Kraken, Sheriff and Copper guitar amps from Victory. Each came with controls for Volume, Gain, Bass, Middle and Treble.
Find out more on the bomb-tested pedals at thorpyfx.com.
The post Are ThorpyFX’s pedals really bombproof? Watch one getting blown up to find out appeared first on Guitar.com | All Things Guitar.