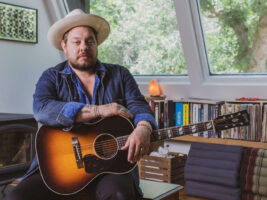 Gibson and Nathaniel Rateliff team up for a new signature acoustic

Gibson has announced a new signature guitar for American singer-songwriter Nathaniel Rateliff, based on its LG-2 platform.

Made by Gibson Acoustic luthiers in Bozeman, Montana, the Nathaniel Rateliff LG-2 Western features a mahogany back, sides and bracing, an Adirondack red spruce top and multi-ply binding. The finish is gloss nitrocellulose, with a vintage-style sunburst across the body.
The neck is also mahogany, with a “Historic V” profile and 24.75-inch scale. It’s joined to the body with a compound dovetail, and is topped with a 20 -fret, 12-inch radius Indian rosewood fretboard. Hardware includes a bone nut and saddle, a rectangular closed-saddle bridge with black pins and vintage-style tuners.
The guitar is also fitted with an LR Baggs VTC under-saddle pickup and preamp, with volume and tone controls in the soundhole.
You can see Rateliff discuss and demo the new guitar in the video below. He also gives an acoustic performance of his song And It’s Still Alright.

Nathaniel Rateliff’s band, Nathaniel Rateliff And The Night Sweats will release their third studio album, The Future, on 5 November on Stax Records. Last week, the band released the slick music video for the lead single Survivor – check it out below, and see if you can spot the surprise cameo from a certain ship, one that may or may not have blocked the Suez canal for a few days earlier this year.

The guitar lists for $3,299. Find out more at gibson.com.
The post Gibson and Nathaniel Rateliff team up for a new signature acoustic appeared first on Guitar.com | All Things Guitar.