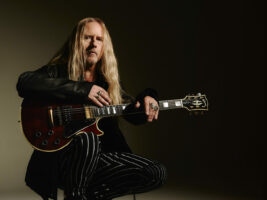 Gibson’s Custom Shop has partnered Alice In Chains’ Jerry Cantrell for a special recreation of his “Wino” Les Paul Custom. The instrument comes in a limited run of just 100, each aged by the Murphy Lab team and signed by Cantrell.

The guitar includes many of the personal touches Cantrell included on the original, including a nine-hole weight relieved mahogany body with a maple top and aged gold hardware. Its neck is also of mahogany and features a custom profile as well as a dense Corian nut.
Pickups are a set of humbuckers, a 490R in the neck and a 498T in the bridge. There’s also a Fishman Powerbridge piezo offering up acoustic-like tones. All these route to three independent volume knobs, a master tone switch and a three-way selector. On top of that, there’s also a stereo output jack for electric and acoustic signals, respectively.
The guitars come in a Wine Red finish and are hand-signed on the back of the headstock by Cantrell himself. To wrap things up, each comes in a Jerry Cantrell Custom Case.