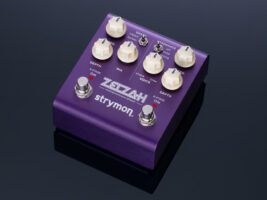 After a week of teasing its latest pedal over social media, Strymon has officially announced the Zelzah Multidimensional Phaser.

Zelzah is a stereo phaser which harks back to the effect’s roots in the late 60s and 70s, but with greater sonic depth and more flexible performance features.
“In addition to providing the best possible version of the vintage phaser sounds we grew up with, we also wanted to expand the sonic possibilities in a way that was unique and unexpected for a phaser,” the brand wrote in a description.
The pedal has two sides, one with two four-stage phasers covering classic, barber and envelope-controlled phase tones, and another with two six-stage phasers designed around an all-pass filter with controls for time response, decay and how the filter interacts with incoming signals.
Zelzah can be configured to run either side independently, in series, in parallel or split to left and right channels. The LFO can be adjusted with speed, sweep and depth controls to cover everything from lush underwater sounds to violent phase attacks.
In addition to an instrument jack and stereo outputs, the pedal also accepts USB-C and quarter-inch for MIDI control. The same quarter-inch jack for MIDI also works with an expression pedal, which can be assigned to combinations of parameters.
Adding a Strymon MiniSwitch lets you store three presets, while MIDI lets you store up to 300.
See an introduction video for the Zelzah below:

The Strymon Zelzah is available now at $349.
Learn more at strymon.net
The post Strymon’s Zelzah is a powerful stereo phaser that promises “unique and unexpected” sounds appeared first on Guitar.com | All Things Guitar.