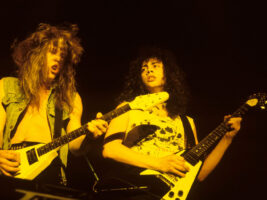 Gibson has teased a possible collaboration with Metallica guitarist Kirk Hammett in a new short video posted to social media.

READ MORE: Dive into the design of Gibson’s super-limited Korina V and Explorer with a new video

The short video plays a clip of the Gibson Logo, superimposed on some horror visuals, before cutting to a clip of Hammett playing his old Gibson Flying V. This Flying V was once recreated by the Gibson Custom Shop, so it’s possible that another run of those guitars is on its way – or something bigger.
Gibson’s Mark Agnesi posted the clip with the caption “It’s happening…” while the official Gibson channel opted for the equally-informative “Coming soon…”

Interestingly, the song choice for the teaser video is Metallica’s The Thing That Should Not Be. Read what you will into that choice.
A recreation of Hammett’s Flying V, if that’s what this clip is teasing, is well-timed. The original 2012 run of guitars were aged, and just recently the Gibson Custom Shop sent a batch of Vs through its Murphy Lab ageing process – a secretive set of ageing techniques that aim for complete authenticity in look and feel. You can read more about the results of the lab here.
Gibson has also just recently announced another set of Vs for another metal guitarist – Dave Mustaine. However, his guitars weren’t just limited to a run of custom shop recreations. The Megadeth frontman landed on his feet in the Gibson camp with guitars from Gibson, Epiphone and Kramer.
Could Hammett be in for similar treatment? Or will it simply be another run of recreated Flying Vs?
Hammett’s signature guitars are currently produced by ESP. Most are the metal S-type of the KH model, however, there have been a few based on the EC platform – that is, hefty solid bodies with three-a-side headstock.
Hammet is no stranger to Gibson, however, and not just because of his old Flying V. He also is a fan of vintage Les Pauls, having bought (and extensively toured) Peter Green and Gary Moore’s 1959 Burst.
The post Gibson teases collaboration with Kirk Hammett appeared first on Guitar.com | All Things Guitar.