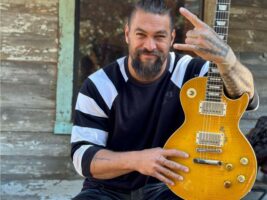 Outside of his career as a Hollywood actor, Jason Momoa is a confessed guitar geek, and is now adding the last-available Gibson Custom Shop “Greeny” replica to his collection.

The Game of Thrones star took to Instagram yesterday (19 December) to proudly show off his most recent purchase: a Gibson Custom Shop Collector’s Edition Kirk Hammett “Greeny” 1959 Les Paul Standard.
The axe is just one of fifty units made in the limited-edition run, and the one acquired by the actor is said to be the last one available for purchase.
Crafted by Murphy Labs, the model is a near-perfect replica of one of the most monumental guitars in rock history. The original model is the iconic 1959 Burst – first owned by Fleetwood Mac’s Peter Green, before being passed down to Gary Moore and, more recently, handed over to Metallica’s Kirk Hammett.
As for the one acquired by Momoa, the guitar is a replica of the Hammett-owned model, crafted in excruciating detail by Gibson.

Part of the Collector’s Edition, the Metallica guitarist was largely involved in the design process of the Murphy Lab models, and even lent the instrument to the Custom Shop so the final result would resemble the original as closely as possible.
Posting an image with the guitar on Instagram, the actor wrote:
“Love you [Cesar] Gueikian and Gibson Custom for saving me the last Greeny,” He also mentioned Metallica in the post, stating, “Kirk Hammett, I’m so stoked. Metallica fo life. All my aloha”.
The guitar in question is so rare that official prices were never announced by the brand, instead, potential customers had to directly contact the brand when considering making a purchase.
However, given the meticulous nature of their construction and the incorporated era-correct materials used on all fifty units, fans online speculate that the price varied from between $50,000 and $75,000.
Other guitars that make up Jason Momoa’s impressive collection include a Les Paul Goldtop model equipped with a Bigsby tailpiece, and a rare replica of Buddy Guy’s polka dot Stratocaster, Master Built by Fender’s Custom Shop.
The post Gibson’s last available “Greeny” Les Paul replica purchased by Jason Momoa appeared first on Guitar.com | All Things Guitar.