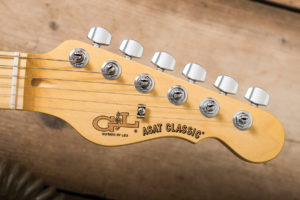 As Mr Fender’s ‘other’ single-cut solidbody powers on into its fourth decade, Richard Purvis finds out if it’s still got that George and Leo magic…
Long, long ago, the great Leo Fender created a single-cutaway electric guitar with a bolt-on maple neck, two single-coil pickups and 25.5-inch scale length. Then, not quite as long ago, he created another one…
While the G&L ASAT may never match the hallowed status of the Telecaster, Leo’s 80s remake has been around long enough now to be considered a bit of a legend in itself. And a deal with Dist-X, Blackstar’s distribution division, should make it easier than ever for British plank-pluckers to get hold of one.
Much of the ASAT Classic’s design is, of course, all about being quite Tele-like but not too Tele-like. So the basic outline and construction are broadly the same, but an extra curve in the scratchplate and a kink in the headstock make it clear this is not just Mr Fender’s tribute to himself. More significant, though, are the pickups. These are G&L’s own ceramic MFD types, designed for higher output than regular single-coils.
Other features to note include six individual brass saddles, a shallow-ish ‘modern classic’ neck profile with 9.5-inch radius and medium jumbo frets, and a bone nut. We’re liking this vivid ‘Himalayan blue’ finish with the parchment guard and maple board, and it’s hiding a little secret: for solid colours the body would normally be alder, but there’s now also a lightweight basswood option, and that’s what’s been used here.In Use
For our list of complaints about the build quality of this instrument, please check your nearest blank sheet of A4 – it’s a classy job, and easily passes the instant playability test that makes a good T-type so likeable before you’ve even plugged it in. As with the alder-bodied ASAT Classic we reviewed in July 2016, the acoustic tone is unremarkable, but it’s certainly big and breezy enough to give those powerful pickups something to work with.
And powerful they are. Taking a standard maple-board Telecaster as our reference point, these MFDs have just as much chime in the top end but distinctly more beef in the lower mids. Be prepared to dial back the gain a bit if your neighbours are home: it’s a fuller, rockier sound, and responds eagerly to overdrive.
As so often with higher-output pups, what you gain in power you lose in transparency and complexity – so if you’re yearning for that classic Tele ‘snap’, this probably isn’t going to make you a happy picker. There’s plenty of bite on the bridge pickup and bags of warmth on the neck, but not a huge amount of phasey cluck in the middle position – this guitar is all about smooth performance rather than character. That, combined with its essential solidity and simplicity, should make it a very effective all-round workhorse.
KEY FEATURES
G&L ASAT Classic
• PRICE £1,739 (inc hard case)
• DESCRIPTION Solidbody guitar. Made in USA
• BUILD Alder, ash or basswood (as reviewed) body with gloss polyurethane finish; bolt-on maple neck with rosewood or maple (as reviewed) fingerboard, 9.5” radius; 22 medium jumbo frets
• HARDWARE Vintage-style tuners, steel bridge with individual brass saddles
• ELECTRICS Two G&L MFD single-coil pickups, three-way switch, master volume and tone
• SCALE LENGTH 25.5”/648mm
• NECK WIDTH 42.9mm at nut, 52mm at 12th fret
• NECK DEPTH 20.5mm at first fret, 22.5mm at 12th fret
• STRING SPACING 35mm at nut, 54mm at bridge
• WEIGHT 3.2kg/7.1lbs
• FINISH Himalayan Blue (as reviewed) – over 50 colours are available, see website for details
• CONTACT Dist-X Distribution 01604 817817 glguitars.comThe post G&L ASAT Classic appeared first on The Guitar Magazine.

Pete Thorn: “I had 55 Beatles records by the time I was in sixth grade”