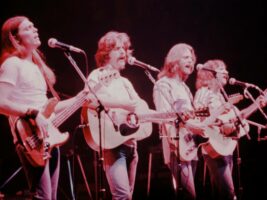 Glyn Johns was reluctant to work with The Eagles after seeing them live: “It was in a club with about four people… it didn’t impress me”

Over the past sixty years, Glyn Johns has built a reputation for working with bands including the Beatles, Led Zeppelin, Eric Clapton and many more, yet, in an interview last week, the producer describes his first impression of The Eagles and explains why he repeatedly turned down the offer to work with the band.

READ MORE: The Who’s Producer Made A Pact To Reduce Keith Moon’s Drinking When Recording Who’s Next

Speaking with Johnnie Walker as part of BBC’s Sound Of The 70s radio show on Sunday (August 7), the industry legend reminisced over what he considers to be the highlights of his long career. It was here where Johns described his less-than-adequate first impression of The Eagles.
Introduced to the band by DreamWorks and Asylum Records owner David Geffen shortly before the release of their debut album, Johns discusses how he was invited to LA by the business mogul and urged to produce the upcoming release.
“I went to a gig [of theirs] which was very badly attended. [In hindsight, my response] wasn’t fair… It was in a club with about four people, so I returned to England to politely decline,” he explains. “Geffen persisted and kept saying I had made a mistake, so I went back to California. [I said] ‘let me see them in a rehearsal situation. It’ll be more intimate and I might be able to hear what they’re doing a bit better.’ They played through the same set, pretty much, in the rehearsal room and it didn’t impress me either.”
While left feeling just as uninspired by the band the second time around, Johns describes how it was only moments later that The Eagles changed his mind – spontaneously performing an acoustic track as he was leaving the studio.
“I decided to go and get lunch and, as I was leaving, Bernie [Leadon] picked up an acoustic guitar,” he recalls to the host. “They stood around and Bernie played the guitar while they all sang. It was the first time I heard what they were… or what they could be and that was this harmony band. It blew me away.”
It was from this moment, Glyn Johns says, that he agreed to work with The Eagles on their debut album. Reflecting upon what he thought was the main standout quality of the band, the producer states that it was the fact that each member had their own individual vocal style that first caught his attention:
“The interesting thing […] is that the individual voices of each of those four Eagles were entirely different from each other. There was no comparison you could make. Completely different sounds, styles of singing, everything. Yet, when they sang together, they created this extraordinary sound,” he says. “With that album, I knew I was onto something while I was making it. I really felt very strongly that it was going to be huge.”
Find the full episode of Sounds Of The 70s With Johnnie Walker on BBC iPlayer.
The post Glyn Johns was reluctant to work with The Eagles after seeing them live: “It was in a club with about four people… it didn’t impress me” appeared first on Guitar.com | All Things Guitar.