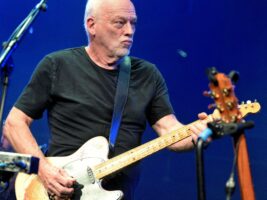 David Gilmour’s mansion is going on sale for £15 million

David Gilmour’s UK home is set to be listed later this month, supposedly costing a colossal £15 million. Located in Hove, a small coastal town in East Sussex, the home is said to feature extensive sea views, its own state-of-the-art recording studio and span nearly 8,000 square feet.

READ MORE: A Heated Letter That John Lennon Wrote To Paul McCartney Is Up For Auction

As reported by Mansion Global yesterday (August 11), David Gilmour and his spouse, novelist Polly Samson will be putting their UK home on the market later this month.
Acquiring the home back in 2015, both Gilmour and his partner were said to have been given the custom-built estate by developer Sirus Taghan. As the property was being developed, controversy was sparked by the developer, who was reported by The Guardian to have been denied planning permits on numerous occasions.
Now, seven years after moving in, the pair are set to be relocating according to London-based property consultancy Pereds.
A nineteenth-century guest cottage and ample parking are said to be included in the listing. In addition, the property also comes with a state-of-the-art door entry system. Here, a remote-controlled design is reported to have been installed – granting access to the property via the reading of biometric fingerprints.
Image: Tom St Aubyn/ Pereds
“Sometimes we hop across the beach with our fishing rods, bring back the catch to meet a few herbs from the garden. Five minutes from sea to mouth,” Gilmour and Samson said in a joint statement. “The main bedroom, with sea views in all directions, is a beautiful place from which to watch the sunrise and sunset across the sea. When you wake up in the morning, the view is always a surprise: the sea and sky are never the same. At night, it’s intoxicating to watch from bed the moon reflected in the water.”
What’s more, the music studio within the property is rumoured to have been converted from an old studio of a Victorian artist and, of course, will be an immediate selling point for any Pink Floyd fans interested in buying the house.
Other amenities include hardwood flooring with underfloor heating throughout and a combination of both log-burning and gas-operated open fires.
See the full gallery of images of the property on Mansion Global’s website.
The post David Gilmour’s mansion is going on sale for £15 million appeared first on Guitar.com | All Things Guitar.