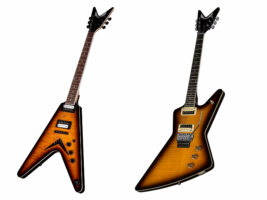 Gibson accuses Dean of contempt of court for “bragging” to Guitar.com about continuing production of V and Z guitars

Gibson has filed a motion accusing Armadillo, parent company of Dean Guitars, of contempt of court, accusing it of failing to act on their legal battle’s final judgement, and of “bragging” in a recent interview with Guitar.com that the company would continue to make the V and Z guitars, even after a jury found infringement.

The main argument Gibson makes in its claim, which was filed on 8 August, relates to the continued existence of product listings of Dean’s V and Z guitars on its website. The wording of the final judgement is clear that Armadillo is now “permanently enjoined from the manufacture, advertisement, and/or sale of its […] Luna Athena 501 guitar, […] DEAN Gran Sport guitar; […] guitars bearing, using, or advertising with the word ‘Hummingbird;’ […] DEAN V guitar; and […] DEAN Z guitar.”
However, as Gibson’s motion points out, visiting the Dean website today (12 August 2022), you can still see pages for multiple guitars in the Dean V and Dean Z range – two weeks after the final judgement. Gibson’s motion does point out that the Gran Sport model, accused of infringing on the SG body shape, disappeared from Dean’s website “almost immediately.”
The second plank of Gibson’s argument relates to an interview conducted by Guitar.com with Armadillo’s then-CEO Evan Rubinson. In the interview, conducted shortly after the jury verdict was declared (27 May 2022) we asked Rubinson several questions about the verdict, and what Dean’s plans going forward were.
We asked: “With the jury ruling that Gibson’s trademarks are not generic, will Dean drop any models from its product line?”
Rubinson responded: “We have no plans to drop the Dean V and Z guitars, nor the Dean Evo headstock design, as the jury found no trademark liability on any of those. That said, the case is by no means over – there will likely be a post-trial briefing, and Gibson may potentially appeal the verdict, despite their touted victory.”
The jury verdict did in fact find that Armadillo had infringed on almost all alleged trademarks – including the Flying V and the Explorer body shapes with the Dean V and Dean Z. The only trademark Dean did not infringe on in some way was the “Flying V” word mark.
Rubinson’s entire interview with Guitar.com has been submitted as evidence alongside Gibson’s filing. The motion accusing Armadillo of contempt of court singles out the above quote, saying that it was a “boast” from Rubinson. It also argues that as he was CEO of Armadillo at the time, the quote constitutes Armadillo “bragg[ing] that it would continue to market and sell at least the Dean V and Dean Z guitars.”
Gibson’s motion adds that: “While Gibson disagreed [with Rubinson’s interpretation] it assumed that the defiance would end with the Court’s Order.” This essentially means that Gibson did not consider Rubinson’s statement inherently contemptuous at first, but that it has become relevant to the case now that Dean hasn’t taken down its listings for its V and Z guitars.
Gibson is hence requesting that “the court should fine Armadillo to secure compliance with the order.” The motion also states that “fines, incarceration, and an administrator appointment are appropriate in this case given Armadillo’s brazen defiance of the Court’s Order.”
Gibson also requests that the “reasonable costs and fees” incurred by the new filing are awarded to it by the court, as “A jury found infringement […] yet Gibson has had to continue to incur attorney fees to continue to monitor Armadillo’s unlawful activities, as well as the fees associated preparing and filing this Motion for Civil Contempt.”
And finally, Gibson’s motion states that it reserves the right to “request compensatory sanctions beyond costs and fees” once it has had the time to establish what those might be.
The post Gibson accuses Dean of contempt of court for “bragging” to Guitar.com about continuing production of V and Z guitars appeared first on Guitar.com | All Things Guitar.