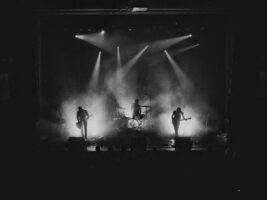 GoFundMe launched for Russian Circles after gear theft, over $60,000 raised

Following the theft of a huge amount of gear belonging to post-metal band Russian Circles last week, a GoFundMe has been set up in aid of the group. Attempts to recover the stolen gear have so far been unsuccessful.

The band’s gear theft has seen a huge outpouring of support from the heavy music scene. Electrical Guitar Company even built Brian Cook a new bass guitar. The GoFundMe has raised $62,798 after 17 hours of being live. Donations have now been disabled.
Cathy Pellow, founder of the band’s label Sargent House, wrote on the fundraisers’ page: “Russian Circles are one of the most hardworking bands I’ve met. As their manager it has been so hard to watch them suffer back-to-back financial losses because of this pandemic – first with a full European tour cancellation that left them deeply in debt and now having all their gear stolen while out in California for their first shows back in two years.
“We then found out our insurance had lapsed and none of it would be covered. If that was not enough today we got the final blow of having both of their Los Angeles shows be cancelled the day before, due to circumstances completely beyond our control.”
The dates in question, supporting System Of A Down, were cancelled due to COVID-19.
“We really hoped that the stolen gear would somehow be found so that we would not have had to ask for so much help. We still have had no leads and getting any of it back seems unlikely. Now, the loss of the income and merch sales from these two big shows is leaving them with just too many unrecoupable expenses for me not to ask our music-loving community to help them.
“Please know, it is only in the most extreme of circumstances that we would ever ask for this.
“A huge thank you to a few of the gear companies that did reach out and did replace a few items. As well as the friends/musicians that offered loaners for them to use. Your kindness was so appreciated.
“With eternal love and thanks to all that help us spread the word and or who can contribute.”
You can see the fundraiser here.
The post GoFundMe launched for Russian Circles after gear theft, over $60,000 raised appeared first on Guitar.com | All Things Guitar.